Although neither of the stars are frequenters in Bollywood, Esha Deol Takhtani and Hema Malini are more than happy spending time with their family. While the Dhoom actress is enjoying her motherhood, her mother and actress-politician Hema Malini is busy with many work commitments. Amidst all the hectic schedules, the mother daughter duo is currently holidaying in London and if we are not mistaken, they are also accompanied by Esha’s husband Bharat Takhtani. 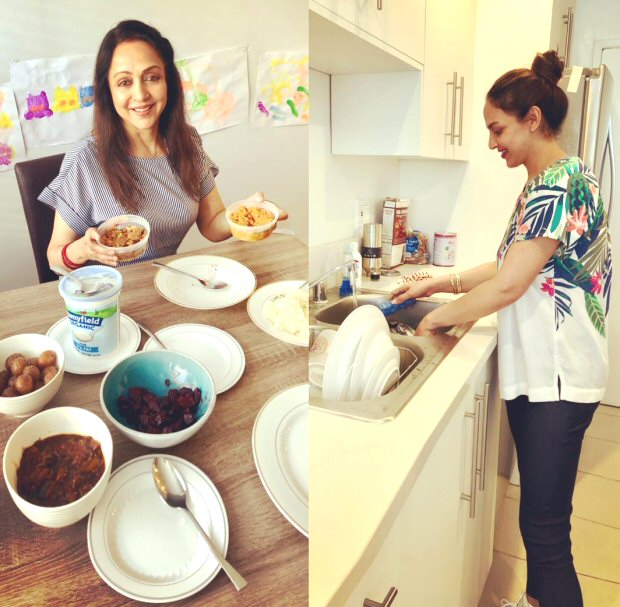 And one of the most intriguing part of their vacation is that they aren’t staying in a luxurious hotel or resort but in an apartment. Esha Deol recently shared a picture from their apartment which looks as homely as ever. The picture features Hema Malini posing with the food on the table and Esha gearing up to do the dishes.

It was the caption of it that said it all! It read, “Food cooked by @dreamgirlhemamalini dishes done by me when u stay in an Appartment on holiday... u cook ur self and do the dishes too.” Looks like the family found their new home abroad as they were more than happy to do all the chores with a smile.

Just a few hours ago, Esha Deol shared another picture, probably from the same holiday wehere she is posing with her hubby dearest Bharat Takhtani.

However, as of now, we have failed to receive a glimpse of their new born daughter Radhya. The couple became parents to the little angel in October last year. Although Esha was last seen in the TV show Roadies as a judge, the actress has stayed away from Bollywood films since 2011. She tied the knot with Bharat Takhtani in 2012 after which she has rarely appeared in films.