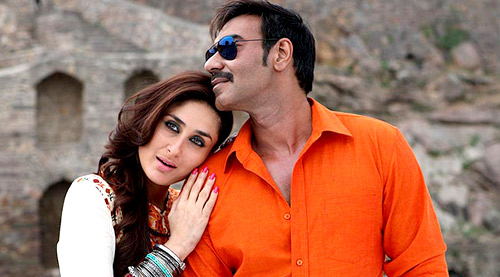 With 100 crore under its belt, Singham Returns is now a Superhit inside a week. While one waits to see the greater distance that it travels from this point on, the fact remains that audience has accepted this Ajay Devgn-Rohit Shetty film in a major way.

However, there is also a common refrain around the romantic angle in the film. Reason being that even though Kareena Kapoor has done well in making each of her scene count, for some out there Singham Returns pretty much stands for an action-dramatic-thriller which doesn't really warrant anyone singing around the trees.

In fact Ajay was very sure of how Rohit had plans to integrate this angle in the fast paced narrative of the cop drama.

"When I saw the first 20 minutes of the film, I thought that picture toh bhaag rahi hai and it is too fast to handle. Then came romance and humor which brought in some 'thehrav'. After that it was drama and from there the film took off in a major way. Such kind of ups and lows are really required in a Hindi film warna repeat value nahi hoti," reasons Ajay.

It is this repeat value that Singham Returns is fetching which is helping it win over the masses in a big way. Still, wouldn't it have helped had the series of incidents been a little less predictable with drama quotient going a notch higher?

"You pick up any of the big films. You would see the simpler they are, the better it is for the final product and of course the audience," says Ajay, "Yes, we kept Singham Returns simple because as long as the emotions connect, audience would root for it. Results are there to be seen."

Today Ajay Devgn is happy that after banking on the brand value of Singham, he has managed to win over new set of fans for the franchise.