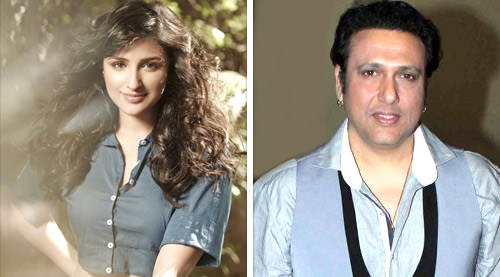 Parineeti Chopra hit it off with her teenage idol Govinda from the word go. They share a common passion for Hindi film songs.

Apparently, Govinda who comes from a family of singers and has sung for his films, taught Parineeti many golden oldies that she had never heard before.

We all know that Ranveer Singh is a Govinda fan. It's written all over his personality. And if that isn't enough he did a full homage in the 'Ishqiyon Dhishqiyon' song in Ram Leela to Govinda. Again he'll be seen doing a Govinda-inspired song-and-dance with his original idol Govinda in Shaad Ali's Kill Dill.

Turns out there is another huge Govinda fan in Kill Dill

Parineeti Chopra can't stop gushing over Govinda. "I've only a couple of scenes with him. But God! What an experience! I wish I could spend more time on the sets just watching him shoot with the actors. He belongs to a different school of acting altogether."

"Someday I'll sing my own song in my film, I promise you," she says.

After Alia and Shraddha it's Parineeti's turn to sing in the movies? Laughs Parineeti Chopra, "Not so fast. It will happen in good time."

Parineeti is very proud of her cousin Priyanka Chopra who has made an international name as a singer. "She has done us proud," says Parineeti emotionally.