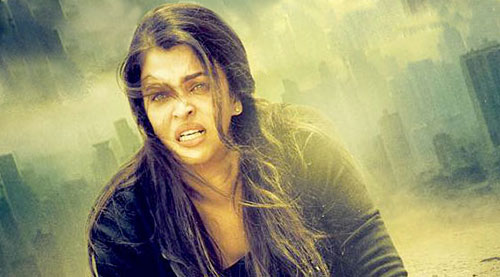 What's the common factor tying Sanjay Gupta to his films? Well, other than an inherent style quotient, it is the presence of a super-strong male protagonist that makes his films what they are. If Sanjay Dutt brought the testosterone level up with Aatish, Khauff, Jung, Kaante, Musafir and Zinda, Jackie Shroff had his moments too with Ram Shastra. Aditya Pancholi, despite being the antagonist, gave Hameshaa some memorable moments while John Abraham made his presence count in Zinda and Shootout at Wadala. As for Anil Kapoor, he showed what macho means in Musafir and Shootout at Wadala.

No wonder, his latest outing Jazbaa is special since it is for the first time ever that Sanjay Gupta has a female protagonist leading the show.

"It would be unfair to call the film as female-centric since Irrfan has a major part to play in the narrative. However, it is Aishwarya Rai around whose character the plotline of Jazbaa hinges, hence making it imperative that Sanjay Gupta focuses on his leading lady to emerge as a hero," informs our source.

More importantly, the film is being pitched for what it is instead of makers painting the town red with news of them bagging the opportunity of Jazbaa being a comeback affair for Aishwarya Rai.

"She decided to take a break, step into motherhood, raise her child, and then get back to making movies. She found a subject worthy enough as Sanjay Gupta's narration excited her. It is as simple as that. There was never any thought that centered on comeback per se or finding a female centric film. The film has Irrfan who has an almost same screen time as her. Both of them are prominent in the promo as well as other publicity material. She is a mother racing against time and Irrfan is helping her save her child. Period," the source adds.

However, the fact remains that this is the first time ever that Sanjay Gupta has a 'Female Hero' as the central protagonist. Did that make this experience any different from the macho affairs that he is known for?

"Well, I have not looked at Jazbaa as a male or female driven film," says Sanjay Gupta, "The hero of the film could have been a male or a female and it doesn't make a difference. For me essentially, this is a two hero film where both Aishwarya Rai Bachchan and Irrfan Khan are heroes. Aishwarya is a mother struggling and fighting for her daughter and while she is at it, she is also a fiery lawyer who gets the job done."

We would like to see how it all unfolds.