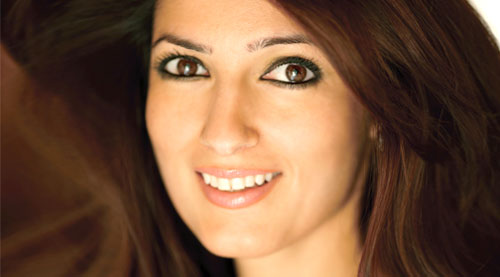 Twinkle Khanna is much more than a star-wife. Contrary to the stereotypical image of her ilk she neither spends time at kitty parties nor tries to keep a tab on her husband's

whereabouts. Instead she has, over the years since her marriage to superstar Akshay Kumar, used her time effectively to hone her skills as an entrepreneur, home-maker and writer. Her first book Mrs

Funny Bones displays Twinkle's skills as an astute anecdotal raconteur who finds wit and wisdom in the commonest of domestic scenes. In an interview with Subhash K Jha Twinkle Khanna speaks on her

success as a home maker and an author.

Your book Mrs Funny Bones is exactly the way you are, warm funny outspoken and a little twisted. Did you set out to manifest your personality in the book?

I think in whatever you write your personality has to seep in unless you write textbooks. This was actually not the first book that I wanted to write but my editor Chiki Sarkar hit me on the head

with a thesaurus that induced partial amnesia so I forgot about that book and wrote Mrs Funny Bones instead.

A star-wife with brains, isn't that a contradiction in terms?

Does an entity like star-wife really exist? I don't see how being married to someone would change the person you are and this tag is also slightly misogynistic because it states that a woman's

identity is based not on her own individuality but on her husband's job!

Having known you from way back before you married Akshay, I can vouch for the fact that your growth as a human being and as a kindred spirit is astonishing.

We all grow, evolve and hopefully get wiser and really what is the other way to be...

The film industry is a cocooned self-centered world. How have you managed to remain so down to earth and connected with the outer reality?

I grew up in this fishbowl and I didn't want to keep swimming in the same circular route constantly. I wanted to see all slices of life and I want the same for my children. They see the luxurious

side while learning to rough it out a bit, which is the way it should be, no?

So many industry marriages are on the rocks, what is the secret recipe of keeping your marriage going so successfully for so many years?

I can't cook so I actually don't have a recipe for anything, including this.

You are very different from the man of the house. He likes beetroot juice, you like coffee...

Yes. Akshay and I are different. He doesn't like to read and I do. I barely see movies; he sees them all the time. He could have been a professional athlete if not a movie star and I'm quite lazy

in that aspect. Our upbringing is different. But somehow, we agree on how we see the world, what's right and wrong.

You poke fun constantly at your mom and mother-in-law in the book. How did they react to your good-natured digs?

I asked my mom-in law once if her friends say anything to her and she just said that she is so proud of me, my heart melted into a puddle of ghee. Both of them know that I etch out caricatures of

the ubiquitous mother-in-law and the interfering mother and it doesn't really seem to bother them.

You've constantly made it clear that you hated being an actress. What if your daughter decides to become an actress?

I will happily support her in whatever she chooses to be

Now that your first book is a success, do you intend to continue writing books?

I am writing my second but it's radically different from this one so let's see.

Mrs Funny Bones is dedicated to your father (superstar Rajesh Khanna). Was he a fan of your wisecracks growing up?

He used to complain that I shoot my mouth off and am stubborn, opinionated, and actually exactly like him. I didn't really know what he thought about my writing and poems till quite recently, an

old friend of his, put up a post on Facebook saying something like 'He could not always understand his daughter's macabre poems but secretly was always proud of her and would tell me about it.' And

that was a moment that will always remain with me.