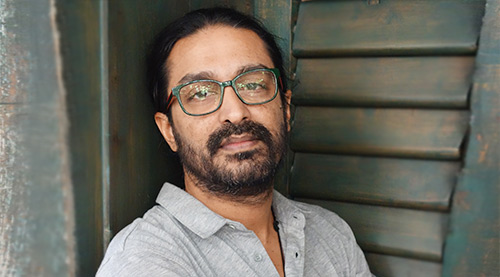 Airlift, the evacuation drama about the 1990 rescue of thousands of Indians stranded in Kuwait after Saddam Hussain's invasion, has landed into a heap of controversies

regarding historical accuracies/inaccuracies. Even officials from the Ministry of External Affairs have jumped into the debate claiming the film shows them unnecessarily in an unflattering light.

Raja, what do you have to say about those experts who feel you've taken too many liberties with facts?

It is baffling! My intention was to show the Indian government in a good light. I feel the whole evacuation process was a great achievement for India. I wanted to celebrate that achievement. I was

generations to connect with the facts. For that I had to take liberties with some aspects of the story.

But experts claim there was never a Ranjit Katyal, played by Akshay Kumar?

I have always said Ranjit is an amalgamation of several heroes who helped in the rescue operations. In fact we have a big disclaimer in the beginning. I have not made a documentary on the 1990

evacuation in Kuwait. I have not documented history. I have only documented the drama behind the story. Unfortunately no one thought of doing this before me.

Thanks to you we know about the incident?

That's precisely why I needed to make this film. My moment of triumph was when Michael Mascrenhas who headed the Air India rescue operations in Kuwait, called me when the controversies regarding

factual liberties broke out. He said, 'I believe 25 years after the incident someone, a filmmaker, has given us the credit for what we did.' I feel when you come out of the woodwork to make

accusations about factual inaccuracy you are missing the larger picture.

And what is that larger picture?

The human drama. My story is a human story told against a historical backdrop where I've employed as much truth as I possibly could.

K.P. Fabian, Joint Secretary, Gulf division of the MEA, at the time of the First Gulf War during 1990-'91 has accused the film of trivializing the issue and spreading misinformation?

Even his statements are being questioned. But I respect his opinion. All of us have telescoped opinions of what happened at a certain point in history. But if you speak to Joe Mathews who is the

son of Sunny Mathews (one of the characters on whom Akhay's Ranjit Katyal is based) he would give you a very different picture of how Mr. Fabian handled the situation. But I didn't want to get into

the politics of the crisis then. I don't want to get into now.

So the characters are more symbolic than real?

Like I said I was, and I am, interested in the human drama. And Ranjit Katyal represents the heroism of the crisis while Sanjeev Kohli (played by Kumud Mishra) represents the Indian democracy. I

wanted today's Young India to feel a sense of pride about what India and Indians achieved during a time when they weren't even born. My intentions should not get muddied by nitpicking.

But to be noticed by the bureaucracy and the Indian government shows the film's impact?

I agree! The fact that my film has connected with the people who were part of the evacuation shows I've succeeded. In fact I was very happy when Mr. Vikas Swarup (spokesperson of the Ministry Of

External Affairs) tweeted saying my film a good entertainer but filled with historical inaccuracies. I am reiterating that I've taken artistic liberties. But I don't think I've misrepresented

anyone or tried to malign anyone at all.

Did you expect so much attention for the film?

Not at all. I am completely amazed!! I thought people will ask why I was showing the Indian bureaucracy so heroically. But the opposite happened.

I was involved in students' politics in Kerala when it had happened. A majority of Indians in Kuwait were from Kerala. So I knew a lot of people who were actually stranded and rescued from Kuwait.

Much later in 2003 I thought of making a film on the theme. It was a film waiting to be made. And I am glad I made it.

Getting Akshay Kumar to get involved with the theme couldn't have been easy?

We spent three weeks discussing the politics of the situation. He wasn't shy of asking questions. At the risk of sounding like a fan-boy I have to admit Akshay brought a lot to the project. Once he

came on board he gave me the freedom to make the film that I wanted him to make. He surrendered to the project and character. He has played the character with the honesty that one would expect from

a Naseeruddin Shah or an Irrfan.

Akshay was very excited by the film.

I came out of the experience with a completely changed view of a star and stardom. I still remember how excited he was when I told him Priya Seth (the DOP) was going to shoot the film. Now Akshay

is a huge supporter of Priya's work. I think he admires her work more than me.

Have you collaborated with Priya Seth earlier?

We've shot 70 commercials together. She also shot my first film Barah Ana. She will definitely shoot my next feature film.