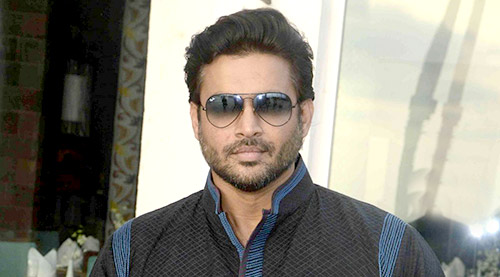 Saala Khadoos has released and yet again, Madhavan has demonstrated that he is an actor par excellence. He may be selective when it comes to picking films but when he

does, he gives it all. Over to the man!

How much Khadoos did you have to turn for this role?

I can only say one thing that when my wife saw the film, she said that finally the world is seeing the real aspect of you (laughs). On a serious note, I didn't really have to go back, change myself

and then come back. This is something that I have done in my Tamil films. My assistants too will tell you that this is something which is another side for me. Actually I wanted to come across as

someone even more 'kattar' (hardcore). However, it is to the genius of Raju Hirani who said asked me not to have that non-endearing look. He suggested me to get that bit of hair in front of me so

that I appeal to women too (smiles).

Especially after Tanu Weds Manu Returns, this must have been an entirely different performance scope for you?

When I was doing Tanu Weds Manu Returns and the films before that, I think I was starting to become a character like that in real life as well, someone who is happy, content and complacent.

I wanted to break out of it and this is when I started saying no to many films. Even my wife said to me that somehow that excitement of heading for the shoot was diminishing for me as I had become

way too comfortable. This is when I heard the script of Saala Khadoos and was bowled over. Normally, when a female director comes to you, you expect a relationship based film or the one

where men are bad. She was different.

How many times would you expect someone to come to you with a script that is centered on boxing, leave aside whether it is a male or a female who makes it? The kind of research that Sudha (Kongara)

had done, so many interviews that she done with the boxers, the whole homework - I was left impressed. I told her that this was my film and I was buying it. I was committed to the film and she

waited 1.5 years for me. See, when something really motivates you such levels, you know that this is a right film. I knew that Saala Khadoos is a film that would change my image.

You had to really bulk up for this part?

In these 1.5 years, I prepared for the part, learnt boxing, got into the right physique. I had to look like a mountain. The muscular content of my body went up. Even though I am not boxing in the

film, I wanted to put something in the background. Aisa nahi lagna chahiye that pehli baar boxing ring mein utra hai. Your body structure and frame should be such that people take you seriously as

a character. As far as acting as a 'khadoos' is concerned then well, it was hardcore acting so I didn't have much of an issue there. I had braces in teeth to get the lisp factor; I had to make it a

You could well be one of the few heroes in the industry who are happy to tell their heroine - 'Main Teri Baap Ki Umar Ka Hoon'.

You are wrong. I am not *one of the few heroes* to be doing that, I am the *only hero* to be doing that! In Tanu Weds Manu Returns, I didn't have a problem when the heroine said - 'adrak ki

tarah badh raha hai'. Dekho yaar, apni audience shaana hoti jaa rahi hai. People on social media also ask me whether I am not scared of anything. I am happy to have white hair on screen with beard

and all. Today audience find it all very endearing; it enhances the appeal. I know that how girls are reacting today. Earlier it was 'Hi Maddy, you are so cute'. Today, they have a lens in front of

them; the Hi factor has changed (smiles)!

As for females, you have worked with Sudha Kongara quite closely, right from the time she was an assistant to Mani Ratnam. How do you see her growth as a director?

films with Mani Ratnam. Entire credit of the film should go to Sudha. Over the years, I have been impressed with Aanand L. Rai and Raju Hirani; now if there is a director I am impressed with, it is

Sudha. She is an iron man, very determined and creative. I am in awe of her.

Before the release, there were comparisons though with Chak De! India.

It is a very common thing for people to compare, though I find it all very strange to believe. Chak De! came around nine years back; it was about a coach and a bunch of girls. Agar koyi

sports film banti hai, anywhere in the world, then there would be a sports person and a coach; they won't achieve things in the beginning, but will do in the end. Chak De! is about a man

finding vindication; here it is about a guy who is 'khadoos', though very talented. Difference hai!