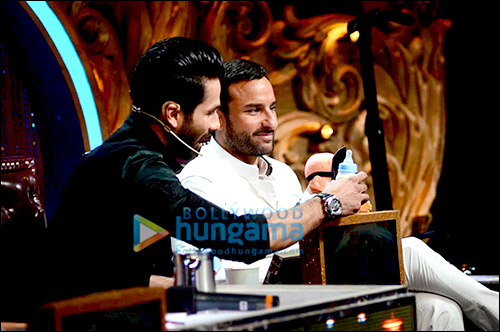 Years ago, the media was abuzz with news on a cold war between Saif Ali Khan and Shahid Kapoor because of Kareena Kapoor Khan. However, the two actors have matured with time and decided to move on. In fact, the two will be soon seen together in a Casablanca styled love story Rangoon. Though it's been a while since the film has been announced, we haven't spotted the two actors really bonding with each other but the dance reality show 'Jhalak Dikhla Jaa' Reloaded gave us a glimpse of the same.

Shahid Kapoor, who is one of the judges of the show and Saif Ali Khan, who was on the show to promote his upcoming thriller Phantom with co-star Katrina Kaif seems to have had a gala time whilst shooting for the show. The two not only got on stage to shake a leg but also clicked seflies during the shoot.

Karan Johar, one of the other judges of the show, decided to however capture the moment of having the two actors together, who once even avoided attending the same event or party. The filmmaker decided to not just share this Shahid Kapoor's selfie along with Saif and Katrina on Instagram but even quirkily captioned it saying, "#jabtheymet".

While we are aware of what Karan has been hinting at, the actors seem to be really enjoying each other's company despite their rather bitter past.