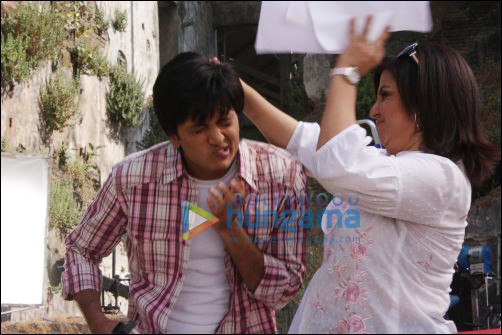 By now its common knowledge that the Riteish Deshmukh- Jacqueline Fernandez starrer Jaane Kahan Se Aayi Hai (JKSAH) helmed by debutant director Milap Zaveri features some of the top names of the industry in interesting cameos. However, the one person who has probably the most interesting cameo in the film is none other than director Farah Khan.

Farah plays herself (director Farah Khan) in the film and her scenes with Riteish are sure to bring the house down. Says Milap, "Farah Khan plays herself in the film. She is this top director who is directing a film with one of the biggest superstars 'Desh' played by Ruslaan Mumtaz. She is shown to be quite forgetful, short-tempered and keeps losing her cool on poor Riteish who plays her Assistant Director in the film. There is a scene in which Riteish gives her a cup of coffee and when she doesn't like it, she spits it all on his face. Basically she treats him like dirt and hardly ever bothers to acknowledge his presence. It's quite a funny scene and both Farah and Riteish have done a fabulous job."

Milap also has another interesting anecdote to share about Farah's character in JKSAH. "We shot the portions involving Farah almost a year ago and during that time we decided to incorporate a gag in which Farah's character says, 'In my next film I am not working with Shah Rukh Khan but am working with the new superstar Desh', played by Ruslaan Mumtaz. Call it coincidence or what, the same happened in real life too when Farah signed Akshay and not SRK for her directorial venture Tees Maar Khan. It was weirdly funny", signs off Milap with a smile.