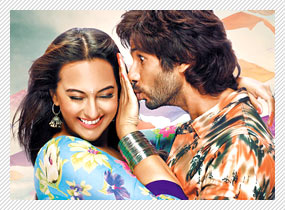 R... Rajkumar released last week and here are some understated gems from the film that Bollywood Hungama would like to share with you!

What R… Rajkumar taught us…

- A heroine would offer to strip down and offer her virginity to the villain only if he could achieve a simple task of bringing down a five feet tall hero to the ground.

- Before that, she won't regret removing her top and 'show a trailer', albeit mistakenly, to her stalker who lies down on her bed in the middle of the night.

- Except for the hero, anyone and everyone would strip down to the waist. Villain would show his well toned body and side villain shows his hairy body. As for heroine, she would keep dipping in and out of water.

- Meanwhile, for this romantic rendezvous to continue, modern day cell-phones come with an ability of planting a real 'lipstick embossed' kiss on cheeks and forehead even if made over a call.

- A bird will most certainly sit on a connecting wire between two dynamites in the middle of the road so that the hero can act like Sherlock Holmes and save the entire gang from an explosion.

- A side villain would carry the hero like a baby around his waist, especially after seeing his entire gang being beaten to the pulp.

- If a hero has a friend, who by the way wanted to be main villain's right hand man for over 14 years, he would even bring you back from the dead. Loyalty to the master and career aspirations be damned!

- To woo his lady love, villain would sing a song - 'I am your bull, you are my shit. Together we are, bullshit'. His gang members would join as chorus too. Oh yes!

-If one doesn't become silent, then you have to become violent! Maybe, that's what they call it as 'Pin drop violence'!


- And the much awaited revelation... that the film has taught us is that the 'R' in R... Rajkumar stands for 'Romeo' and not 'Rambo'!