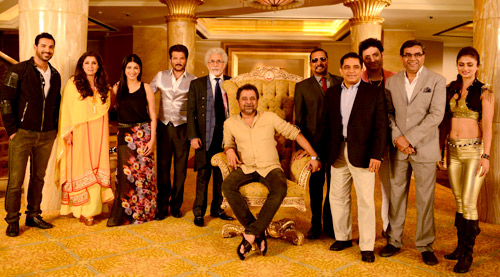 "After Fast and Furious 7, Welcome Back is the first film to have been shot at the splendid Emirates Palace in Abu Dhabi," revealed Producer Feroze Nadiadwala to Bollywood Hungama recently in Abu Dhabi. Nadiadwala says that he could have shot in any swanky five star hotel in India but he chose Emirates Palace since he didn't want to compromise on the scale that he and director Anees Bazmee had envisioned. Emirates Palace is the second most expensive hotel ever built. With towering domes, magnificent lawns and a sparkling private beach, it is a man made spectacle that is simply stunning. In the film, it is Naseeruddin Shah's Palace.

When I saw stalwarts like Naseeruddin Shah, Paresh Rawal, Nana Patekar, Dimple Kapadia and Anil Kapoor enacting a scene, it was a moment to cherish. They were flanked by a very fine character artiste Mushtaq Khan (the quirky assistant of Aamir Khan in Hum Hain Rahi Pyaar Ke, besides many other films). "With the addition of Naseer bhai, Welcome Back is going to be a fun ride," said Paresh Rawal. He added that since Welcome had been loved by people, the sequel already has a familiar ground of characterization then one can attempt something new in terms of the backdrop. He gave the example of Lage Raho Munnabhai, the sequel to Munnabhai MBBS. "It took a quantum leap in terms of screenplay, story, character, that's an advantage in a good sequel," Rawal said.

Welcome has been one of the biggest hits of Akshay Kumar. His absence in the sequel has raised eyebrows. "Welcome Back is not Akshay's story. Even if we want to take him, he won't fit into it. A new character is introduced which is John Abraham," Feroze Nadiadwala said. There have been reports that Nadiadwala is upset with Akshay since he didn't want to be a part of the sequel of Hera Pheri. "No. We have to respect his professional reasons. Likewise he has to respect our professional reasons. Waqt sab theek kar deta hai," Feroze said. Tentative release date of Welcome Back is January 23 the day when Akshay Kumar's Baby is also releasing. "It could be January 23. We are ready. A few songs are yet to be shot in India which we shall do in November," Feroze said.

Naseeruddin Shah is one of the finest actors that India has ever produced. He has been part of some of the best art films made in India but he finds it amusing when asked, why is he part of an out and out commercial potboiler like Welcome Back. "I have done films like Mujhe meri biwi se bachao, Tehelka, Zinda jala doonga. I have worked with great directors like Anil Sharma, then why are people surprised. Some people feel why does he work in commercial films. A few people tell me, that they liked my Art films and why am I doing commercial films. I take names of a few Art films and ask them if they have seen them. They say, no we haven't. I guess I am doing something wrong," Naseer said, raising laughs. "I was in the mood to have some fun hence Welcome Back. I like the sense of Anees Bazmee. I found this character very interesting. Nana, Anil, Paresh, Johnâ€¦ I thought we will have a lot of fun and we have had a lot of fun," Naseer said. Shah will be fitting into the shoes of Firoz Khan (Welcome). He plays the Don of all Dons in Welcome Back who happens to be blind. Shiney Ahuja is his son in the film.

Controversial actor Shiney Ahuja is making a comeback with Welcome Back. He was hesitant while speaking to the media in Abu Dhabi. The self esteem is still low but he seems determined to make an impact. Ahuja wants to make a strong comeback for his daughter's sake. He is grateful to the entire team for having backed him. When asked to clarify on reports that Shruti Haasan wasn't comfortable working with him, Shiney said that he was as respectful towards her as he was with anyone else. Director Anees Bazmee clarifying on the matter said, "I told Shruti to concentrate on her work. She is not a producer or director that she will decide ke kya hoga kya nahin."

Majnu Bhai is one of the most entertaining characters essayed by Anil Kapoor in the last ten years. Amongst the several Tapori characters that he has played in his career, this is one of the most remembered. "We never really attempted to make a great film. Our attempt was to make an entertaining film. A film, which people from all walks of life should enjoy and have fun. We are not taking ourselves too seriously, although comedy is a serious business. Welcome has a great recall value. I think we will live up to all the expectations," Anil said excitedly. "In this film we've become Shareef. We've left our business. We are not the typical Bhai any more. Bhai jo shareef ban chuke hain. It is fun. I think you all will like it. It was tough to find a replacement for Firoz Khan. I think Naseer doing the film has added a lot to the film. When you have such a big starcast then you need someone in the opposition who has the stature. It makes a lot of difference," Anil added.

Shruti Haasan, the glamorous quotient of Welcome Back has been having a tough time juggling between the extreme cold in Zurich (song shoot for her Tamil film Poojai) and then flying off to the desert clime of Abu Dhabi but she is enjoying herself since she considers herself to be a workaholic. Haasan is the Rakhi sister of Anil Kapoor and Nana Patekar in Welcome Back. Her name in the film is Ranjana. "She is the center of chaos. She is the reason why so many Anees Bazmi chaotic things happen in the film," Shruti said. Considering Anil Kapoor, Nana Patekar, Paresh Rawal, Dimple Kapadia and Naseeruddin Shah are seasoned actors, what was the reaction of her dad Kamal Haasan on her working with such great actors. "My dad is very very happy that I am working in this film. All of them have been so lovely with me," Shruti said.

I observed Anees Bazmee at work the entire day. Anyone who feels that directing a movie is easy must spend one day on a movie set. Anees gave cues to his actors, told the light boys how to hold coloured papers in front of the big lights, hobnobbed with the cameraman, instructed his assistant directors and kept a simultaneous eye on the Monitor as well as the exact position he wanted his actors to stand in.

Producer Feroze Nadiadwala promises a grand scale in Welcome Back. "Some of the shots you will see in the climax, you wouldn't have seen in any of the Bollywood films. Both in terms of skill and scale! We have shot some Helicopter chase sequences that you've never seen. It took us 8-9 months for the permission to shoot in Emirates Palace. Some of the helicopters that we've used belong to the Royal Family of Dubai which don't look like Helicopters from anywhere. There are sky drivers. John is driving a Maclaren that goes to 340 Km/hr. We have shot on the 155th floor of Burj Khalifa, the tallest building in the world. Anil shot for Mission impossible at the 124th floor," Nadiadwala said enthusiastically promising a spectacle that has rarely been seen in Indian cinema. As I walked my way out from Emirates Palace at night, the grandeur of the grandly lit mammoth architecture struck me. If the team of Welcome Back translates this grandeur backed with fun writing and performances then it will surely be a film to watch out for.

“Our medical fraternity is at breaking…