Filmmaker Abhishek Varman, who helmed 2 States in the year 2014, is back after four years for a multi-starrer film Kalank. The film is in collaboration with Fox Star Studios, Dharma Productions and Nadiadwala Grandson Entertainment. The film went on floors in the month of April with Varun Dhawan, Alia Bhatt, Sonakshi Sinha and Aditya Roy Kapur. Just a week ago, even Madhuri Dixit began shooting for the film. 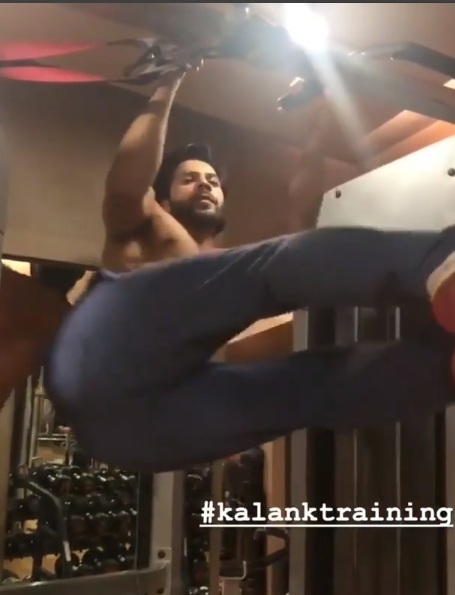 As Varun Dhawan is putting in a lot of effort into the film, he is sweating it out in the gym for the film. The actor is undergoing a pretty intense workout regime to stay in shape for his role. Though his role is kept under wraps, it seems like he will be seen in a new avatar altogether. Varun shared a video on his Instagram story while training on the bars. Flaunting his body and abs, he was definitely training hard last night.

Speaking about the film, Varun Dhawan had earlier said, “Kalank is very special for Karan’s production house, as it has been in the making since 2004. It was important for us to choose the right film to come back as a pair. People expect a lot from us.”