Bollywood will see many fresh pairs in the forthcoming films. One of the pairs is Ranveer Singh and Alia Bhatt who will star in Zoya Akhtar's directorial Gully Boy. Over the course of the shooting, the two stars have become very close and even have nicknames for each other. So when Ranveer Singh was invited for the screening of Alia Bhatt starrer Raazi, he could not say no. But, something really interesting happened at the screening which left the viewers impressed. 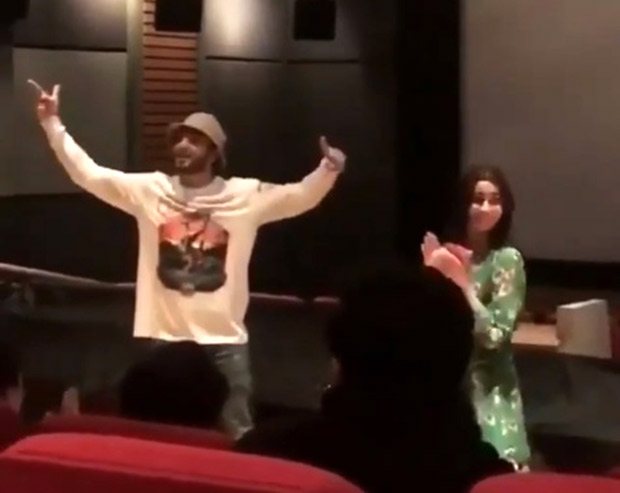 Several Bollywood stars turned up for the special screening of Alia Bhatt and Vicky Kaushal starrer Raazi held in Mumbai on Wednesday. Ranveer Singh, too, was one of the guests who entertained the audience with his rap skills. As he plays the role of a street rapper in Zoya's forthcoming film Gully Boy, he showcased his skills at the screening. He was seen rapping to Divine's 'Mere Gully Mein' at the audi while Alia Bhatt sang along and cheered for him. This is probably the title track of the film as well which will have a recreated version of it.

Raazi will narrate the story of an Indian spy named Sehmat, played by Alia Bhatt, who is married off to a Pakistani military officer. This is set in 1971 during the Indo- Pak war. It stars Vicky Kaushal as Alia’s husband and released today, May 11, 2018.

Gully Boy will bring Ranveer Singh and Alia Bhatt on the big screen for the very first time. Although they have worked in a couple of ads for an e-com travel portal, this will be their first film together. This would be the second collaboration between Zoya and Ranveer after Dil Dhadakne Do. The film is scheduled to release on February 14, 2019.

Pooja Bhatt shares a picture from the 90s;…