Arjun Kapoor and Parineeti Chopra are busy shooting Vipul Shah’s Namaste England in Patiala, Punjab. The sequel to Akshay Kumar and Katrina Kaif starrer Namastey London titled Namaste England started its shoot recently in Patiala after Amritsar schedule. As the duo Arjun Kapoor and Parineeti Chopra continue to spend several hours together on the sets, their goofiness is only increasing. They often share cutesy videos and photographs from the sets of the film. 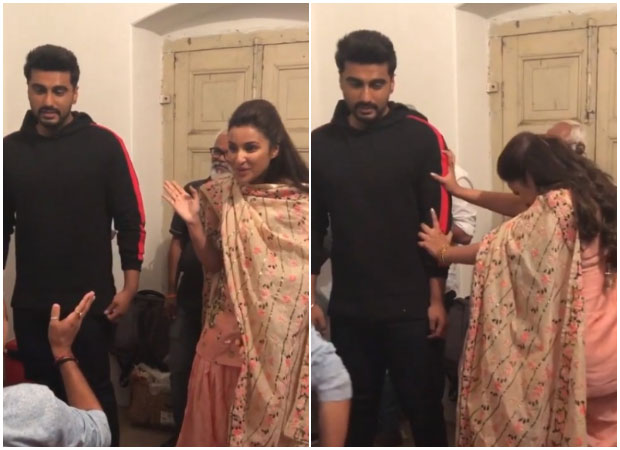 This afternoon, Parineeti Chopra turned up the goofy factor by sharing a funny video. She is seen trying to really push Arjun but fails to do it twice. In the video, Vipul Shah is seen enjoying the moment while the two stars continue to banter. Arjun Kapoor is in his sweats whereas Parineeti looks beautiful in her Punjabi avatar. Sharing the video, Parineeti captioned it, "This video speaks for itself ???????? I try this everyday and fail miserably. Full body weight on him but he doesn’t budge!!!! As a result baba’s arrogance is increasing.But very soon I’m gonna be successful and post that video!!!!!!!! ???????? @arjunkapoor #WeightTrainingNeeded #NamasteEngland #NamasteArrogance."

Vipul Amrutlal Shah’s Namaste England is a young and refreshing story that traces the journey of two individuals Jasmeet and Param. It tracks their love story across the landscapes of India and Europe. Starting from Punjab and moving to Ludhiana, Amritsar, Dhaka and all the way to Paris followed by Brussels and finally to London. It’s a fun quintessential Bollywood film starring Arjun Kapoor and Parineeti Chopra.

Produced and directed by Vipul Amrutlal Shah, Namastey England is presented by Pen Movies and Reliance Entertainment in association with Blockbuster Movie Entertainers. The film is scheduled to hit the theatres on December 7, 2018.