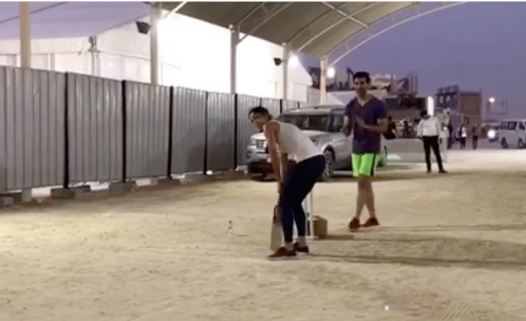 Katrina Kaif is currently keeping busy with the shooting of Tiger Zinda Hai. The film is on its last schedule and is being shot in the beautiful locales of Abu Dhabi. While the actress is busy shooting, Katrina Kaif is also utilizing her free time in the best way possible.

Katrina Kaif has been surfing, playing volleyball in the spare time on the sets of the film. Now, she has taken interest in cricket and is sharing some hilarious videos of her attempts to be good at the game. On Sunday, Katrina shared the video and wrote, "My own cricket team ( just hear the fake appreciation for my "shots" .....) Surfing done, volleyball done ..... cricket? Work in practice #whathappensbehindthescenes #tigerzindahai."

Tiger Zinda Hai stars Salman Khan and Katrina Kaif in the lead roles. The film is a sequel to Kabir Khan's Ek Tha Tiger. Directed by Ali Abbas Zafar, the film is set to release on December 22, 2017.