Ranveer Singh and Shahid Kapoor came together on the big screen for the first time in the historical magnum opus Padmaavat. During the shoot of the same, there were many reports claiming that the film’s hero [Shahid] and its main antagonist [Ranveer] didn’t get along well with each other, reports that were neither accepted nor denied by the two of them. However, a recent video of the two hugging it out have set the record straight that the two actors have left bygones be bygones. 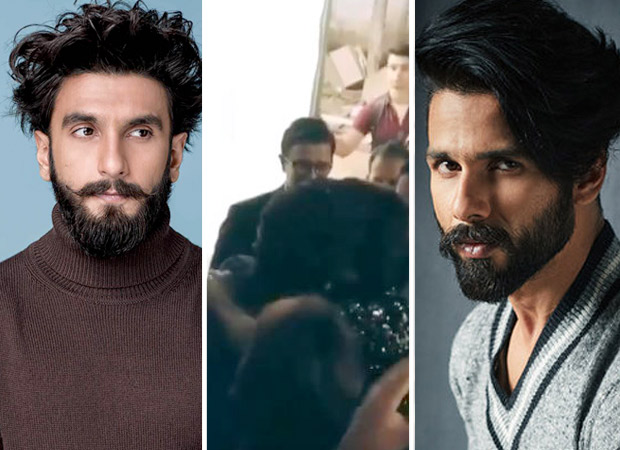 In a recent video that is being posted by the fan clubs of Ranveer Singh, we see the Gully Boy actor hugging Shahid Kapoor. The latter too responds to him with a smile indicating that they have extended an olive branch to each other. If reports are to be believed, the said video was recorded when Ranveer and Shahid attended the same wedding in Delhi recently.

Readers may be aware that Ranveer Singh, soon after his last release Gully Boy hit the theatres earlier this month, took off to the capital to attend a wedding. It was here that he met his Padmaavat co-star where they greeted each other quite warmly. The video also features the two of them having an interesting conversation with all smiles!

-
????| Ranveer Singh and Shahid Kapoor at a wedding in Delhi , last night ???? pic.twitter.com/InwLZ1CSPi

During Koffee With Karan 6, Karan Johar had quizzed Shahid Kapoor about the reports of his alleged cold war with Ranveer Singh on the sets of Padmaavat. The actor had arrived on the show along with his actor-brother Ishaan Khatter, wherein he had replied that things happen during the sets but eventually everyone works towards their film. However, his reply during the rapid fire indicated that he wasn’t quite happy with Padmaavat. When Karan had asked Shahid to complete the sentence, ‘You wish Padmaavat was a little’, Shahid had said ‘a little more balanced’, indicating that he was quite unhappy with his role in the film.

However, the recent video indicates that all is good in the hood and the two actors looked quite happy to see each other.