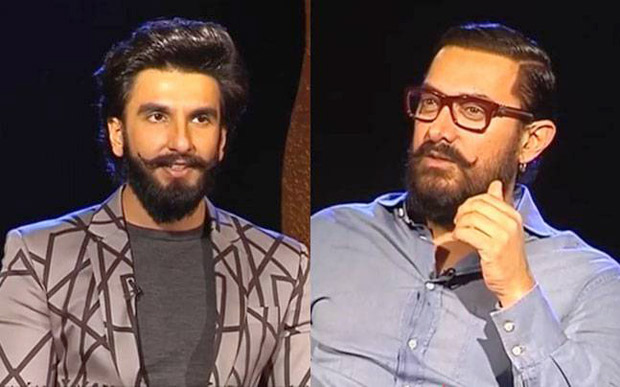 Aamir Khan has a very loyal fan following and Ranveer Singh is one of those actors who is an unabashed fan of his. Recently, the duo came together for an interview on a leading news channel where Ranveer Singh's all time dream came true to interview Aamir Khan. The segment is called 'Unforgettables' where two stars get to interview each other and talk about their experiences and journey.

Both Ranveer Singh and Aamir Khan started off by talking about how they got into acting and when the seed of acting was planted. Ranveer was in awe when he got to know how Aamir Khan decided to leave studies to get into filmmaking. On the other hand, Aamir Khan was fascinated to learn Ranveer's story as the latter didn't have any film background and was curious to know how he got into films.

In the candid conversation, Aamir opened up about how his family was shocked to learn about Aamir leaving studies to get into movies. He also reminisced about the time he was a kid and used to love to listen to stories. Filmmakers would come to his house to narrate scripts to his father and uncle and he would just sit there and listen to them. This is how he got interested in filmmaking.

Ranveer Singh also talked about his debut film Band Baaja Baaraat and how raw he was on the first day on the set. He also shed light on Anushka Sharma being his saviour and making things easier for him. They then talked about how their personalities change whenever they meet Amitabh Bachchan because of the megastar's aura.

In the end, Aamir Khan gave a very shocking trivia about Rang De Basanti scene where his character starts bawling in a scene which is till date one of the best scenes from the film. While talking about the same, Ranveer said that every time he watches the film, he starts bawling during the scene. Aamir revealed that the scene wasn't his best which shocked Ranveer. In a candid revelation, he was prepared for the scene but due to schedule change, they had to shoot that scene later. And even though people absolutely connect to that scene, he still doesn't find it good enough.

The conversation between Ranveer Singh and Aamir Khan reveals a lot of about their early days before movies, how they got into mainstream movies and how they choose creativity over films.