Virat Kohli’s Royal Challengers Bangalore won match against Priety Zinta’s Kings XI Punjab and guess what the highlight of the match was? Anushka Sharma made a special appearance to cheer on her husband Virat and was seen sending all her love from the stands. After the momentous win, Virat called her up and the two were deciding on a place to meet after the match got over. The two talking over the phone while facing each other is every couple in love ever! Aww, now we really need to thank these guys for keeping it so real, always! Anushka looked was beating the heat in style with a black spaghetti top and denim shorts. 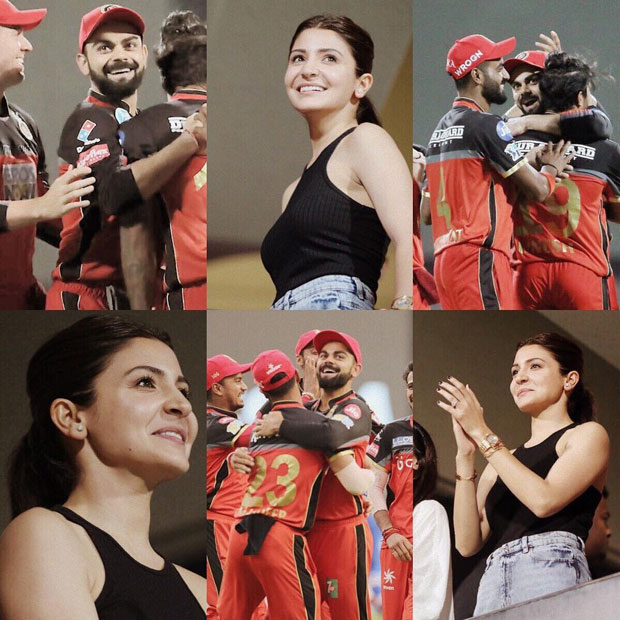 It should be noted that both Virat and Anushka hardly got any time to spend with each other after their wedding. Virat got busy with the South Africa tour and Anushka was busy filming for her movies Zero and then Sui Dhaaga. Now, the Indian cricket’s blue eyed boy is neck deep in work with the current season of Indian Premier League going on and Anushka has her pre-production work of her upcoming projects, which she will be helming with brother Karnesh Sharma under the banner of Clean Slate Films. It is rumoured that next venture from her production house will be a comedy film and she would be a part of it as she really was yearning to do out and out comedy movie since a long time now.

She wrapped up Sui Dhaaga shoot to spend some time with Virat while the IPL season is on-going. Anushka is the biggest fangirl of Virat there is because if she cannot attend his matches, she makes sure that she catches them on television. There is nothing like couples supporting each other’s careers and that’s what gives us couple goals.

Thisss ???? my heart ♥️ They both are so eager to meet each other ♥️ #CoupleGoals #virushka #viratkohli #anushkasharma #Goals #husbandandwife #MrandMrsKohli