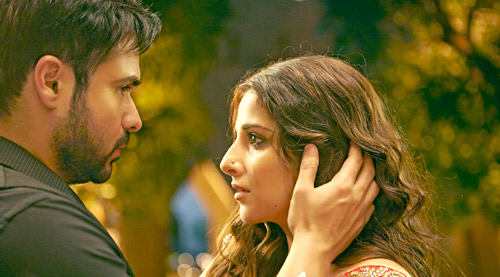 Priyanka Chopra has done it earlier and now Kangna Ranaut has done it again. With mainstream Bollywood actresses getting National Awards for their performances in commercially successful films (Fashion, Queen), the 'art/offbeat' tag attached to films that go on to win awards at the highest level is wearing off finally. And now, if filmmaker Mukesh Bhatt is to be believed, next year it could well be the turn of Vidya Balan once her Hamaari Adhuri Kahaani releases and wins over audience as well as critics alike.


"I can tell you in writing that Vidya Balan would be remembered for next 100 years after her performance in Hamaari Adhuri Kahaani. When I see her performance on the sets, then my heart goes out to her. The kind of sincerity that she has shown for this film is something that very few actors have. Trust me, for the year 2015, every single award would be in her pocket, including the National Award," declares Mukesh Bhatt.


Meanwhile, he is happy with the fact that Vishesh Films is set to enjoy a very eventful first half of 2015, what with Mr. X and Hamari Adhuri Kahaani set to release after Khamoshiyan.


"I am very excited again; these are three distinctly flavored films of the year. This is what makes Vishesh Films so 'vishesh', he smiles, "We are committed to do everything which is special."


His Khamoshiyan featured an absolute newcomer (Sapna Pabbi) in the female lead and now Mr. X has an almost newcomer in the form of Amyra Dastur (Issaq). So are there any specific traits he along with Mahesh Bhatt look for in every newcomer?


"The first trait that we look for is the way an individual talks. When a person starts talking, you have to see that spark. Once you are convinced about that, then you have to groom that person. Every person who comes to your door is new, and you need to polish him. You have to make him understand what camera is all about and what goes into dialogue delivery. Then you need to do workshops before he is ready to be on the sets and get rolling. There is a lot of work that goes into making a newcomer presentable for the big screen," he says.


On a parting note, he chuckles, "It is a challenge in itself to spot talent. We are in the business of making destinies and careers; this is what gives us a high."