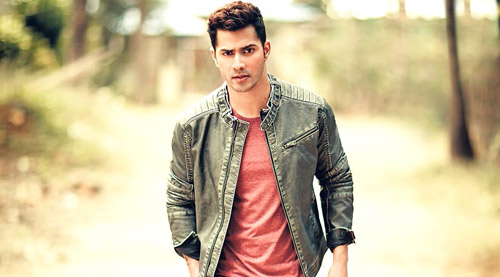 With Badlapur crossing the 50 crore mark, Varun Dhawan has managed to keep his cent percent record intact. The only actor from the current generation to have four back to back successes to his name (Student of The Year, Main Tera Hero, Humpty Sharma Ki Dulhaniya being the other three), he could well be en route making it seven in a row, what with Any Body Can Dance - ABCD 2, Dilwale and Dishoom being his next three releases.

"Well, ABCD 2 is shaping up really well. We have just 10%-15% shooting left," informs Varun, "It is wonderful to be working with such amazing technicians. Remo D'Souza is a superb director. Moreover, we have shot the film in 3D, which is going to be an experience in itself."

He further stresses on the fact that beyond the dance routine (which is obvious for the film of this genre), ABCD 2 is bound to touch the emotional chord again.

"It is a very new and current film. Moreover, just like ABCD, this too is based on a real story. Beyond that, I can't reveal much as we would have a lot to talk about once the promotion begins," says Varun.

What he promises though is that he would be seen dancing his heart out with the film. "There are a lot of songs and dances. Isse faayda yeh hua hai ki jo main song aur dance Badlapur mein nahi kar paaya tha, woh sab balance ho gaya hai," chuckles Varun.

As for the songs and dances, it is but obvious that he would have a lot of that to his credit with Dilwale, which sees him facing the camera for the first time in a Shah Rukh Khan and Rohit Shetty film.

Meanwhile, there is a lot of brotherly love set to be on display, what with him and Rohit Dhawan coming together for Dishoom, a Sajid Nadiadwala production. So much of his involvement would be on display for the film, considering the fact that it is a family affair.

"No, Rohit doesn't let me get involved at all," says Varun in a point blank tone, "He is developing the script for the longest time and is a complete master on the sets. He is the captain of the ship. I know for sure that he would be shouting at me the most."

The man with whom he is set to have some nice time on sets though is John Abraham, who is his co-star for Dishoom. "Yes, of course," smiles Varun, "I know John for quite long. He has made movies with dad and Rohit (Desi Boyz). I am quite charged with the fact that we would be coming together with Dishoom."

Hopefully, the screen would see some sparkle as well with Varun coming up with a flurry of highly promising affairs.