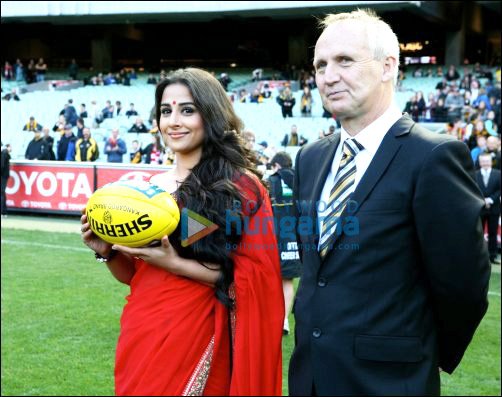 Vidya Balan has fast become the most sought after actress in Bollywood following the success of her films The Dirty Picture and Kahaani. The actress was recently in Australia as a special guest for the Indian Film Festival in Melbourne.


Vidya however didn't limit herself to just the film festival. In fact, the actress draped in a red Sabyasachi sari handed the Match Ball to the umpire to signal the start of a match at the ongoing Australian Football League, in Melbourne. With this Vidya became not just the first Indian, but also the first woman and first non-former player to do the honours of flagging of a match.

The event that took place at the Melbourne Cricket Ground saw Vidya flaunt her own jersey and even flirt with one of the team's mascot while the Richmond Tigers played the Sydney Swans.