As Stranger Things 4 Vol. 1 premieres on May 27 on Netflix and we can’t wait for the iconic red neon glow to light up our screens as the catchy opening theme plays. Netflix India has a special treat for fans that will leave them intrigued and wanting more. Self-proclaimed Stranger Things fanboy and Bollywood actor, Varun Dhawan joins in the fun with a one-of-a-kind homage to his favorite Netflix series. 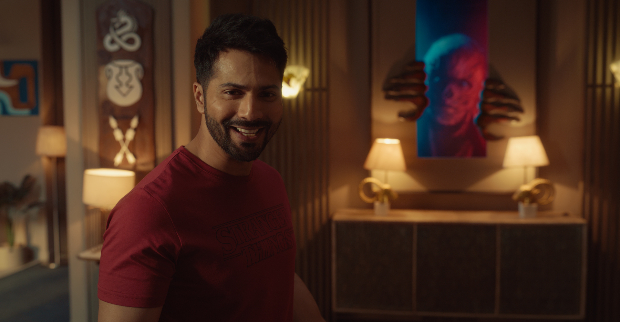 Varun’s been no stranger to the series, flaunting his love for the Netflix show with his very own cool Stranger Things merchandise. In a new video released by Netflix, the Judwa 2 and Student of the Year star is seen giving us an elusive tour of his house, a dream come true for any fan! As he shows us around, one can glimpse into the actor’s geeky side with a range of cool artifacts and wall art. He also candidly shares his love for the series and its iconic characters.

All seems fine till we go deeper into the tour and find that ‘Stranger Things’ are at play! Continuing on the tour, the atmosphere gets eerie by the minute as all our favourite elements from the series start to take over, including Varun showcasing his telekinetic abilities, and glimpses of the rift leading to the Upside Down and Varun’s very own pet ‘Demodog’. Much like the series, fans will be left on the edge of their seats as they travel to and back from the Upside Down, wondering about Varun’s next move as things get thrilling by the second!

It’s been over two years since we last visited the quaint little town of Hawkins and we can’t wait to go back and witness what’s in store for Eleven, Mike, Will, Dustin, Lucas, Max, and the gang! Stranger Things has found a special place in the hearts of fans across the world. The show has become a pop culture obsession as fans have truly made the series their own with Upside Down-themed pop-up bars, El’s Eggo-inspired drinks, cosplaying fans, vintage video games, Stranger Things themed fashion shows, and much more.

The latest season picks up six months after the Battle of Starcourt and fans can’t wait to find out which new threats emerge from the dangerous world of the Upside Down!

ALSO READ: Stranger Things season 4 to release in two parts; volume 1 to premiere on May 27 and volume 2 in July