Last Updated 30.06.2022 | 10:44 PM IST
feedback language
follow us on
Bollywood Hungama » News » Bollywood Features News » EXCLUSIVE: Kartik Aaryan reveals what he would answer if Donald Trump were to ask him about Twitter

Kartik Aaryan and Kiara Advani are currently promoting Bhool Bhulaiyaa 2 extensively across platforms. Amidst those, the lead pair of the film had an exclusive interview with Bollywood Hungama and the actor answered some interesting questions about the film, co-actors and Donald Trump. 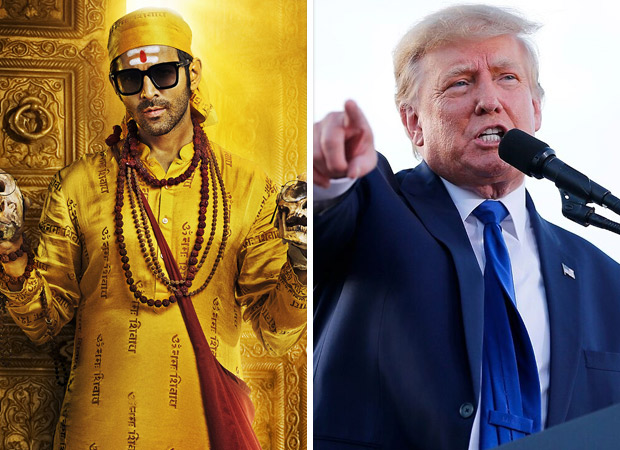 EXCLUSIVE: Kartik Aaryan reveals what he would answer if Donald Trump were to ask him about Twitter

Bhool Bhulaiyaa 2 is a horror comedy that features the age-old legend of a witch having toes facing their back. Keeping up with the horror yet funny theme of the film, during the rapid-fire Q&A session with Bollywood Hungama, Kartik Aaryan was asked what he would answer to Donald Trump if the latter asks him why his tweets are always backward. While the question left Kartik a little surprised, he laughed and responded, “Check your Twitter account…” Kiara Advani chipped in adding, “I can just image how Trump would say that to Kartik?” To the same, Kartik responded in American accent Hindi saying, “Kartik, mere tweets ulte kyun hote hain.” He continued adding, “I would just say Check your Twitter account. Does he have a twitter account. No? Then that’s why I would ask him to check.”

Speaking of Bhool Bhulaiyaa 2, besides Kartik Aaryan and Kiara Advani, the film will also feature Tabu, Rajpal Yadav among others. Although the film is inspired by the 2007 film, it is said to be a completely different story with different characters. The first film featured Vidya Balan, Akshay Kumar and Shiny Ahuja in lead roles with Akshay playing the role of an unconventional psychiatrist. In the 2022 version, Kartik can see ghosts and unexpectedly comes across the infamous Manjulika. Directed by Anees Bazmee, the film is said to hit the big screens on May 20.