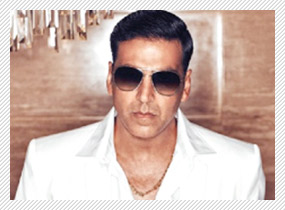 A couple of months after the release and success of Holiday, Akshay Kumar is now arriving with Entertainment. With the actor back in town after a month long holiday in the U.S., he indulges in an exclusive tÃªte-Ã -tÃªte before embarking on a full-on promotional tour.

100 crore success of Holiday must have been music to your ears. However, this is one film about which you must have been sure of its success, isn't it?

Over the years, I have witnessed many wholesome films not quite making it at the Box Office, which can be quite devastating at times. But as much as I loved making this film (for I literally broke bones completing it on time), no one can predict audience's response to serious cinema. But low and behold, this one hit the nail on the head; it just intrigued and captured people's attention. I couldn't be more grateful (smiles).

And now you arrive with an out and out laughter riot vEntertainment.

I have dabbled in serious cinema this year with Holiday, so now it's time I put my laughing gear on. It is fun to be turning up the volume for a good old summer festival flick, 'doggy style' (winks).

When Sajid and Farhad came to you with Entertainment which has farfetched plot, was your immediate reaction that of acceptance or utter amazement?

After all these years, nothing shocks me anymore! It either excites me, or concerns me. But this proposal was one of the funniest I had heard in a long time. I have so much admiration and faith in these kind-hearted brothers Sajid and Farhad. They have an incredible track records in this industry; as a matter of fact they have had more hits as writers than most directors have in a lifetime.

While you are giving a break to Sajid and Farhad, you are also reuniting with Sonu Sood years after Singh Is Kinng. That must be special.

Yes, though I feel health wise we may be jinxed as a duo. In Singh is Kingg his character was on a wheel-chair for half the film. Now for Entertainment he had just recovered from a major lower leg surgery. In fact, for quite some time he had not even come off his crutches and had iron rods pinned in his leg. So in all honesty, I think he is one of the bravest men I have come across in this industry.