The highly awaited first full-length Japanese album 'Still Dreaming' from the popular 4th generation K-pop group Tomorrow X Together is here and it is sonically, amazing! After much anticipation, while dropping multiple teasers, TXT has released the Korean version of their Korean track, 'Blue Hour' which released in October 2020 along with their album 'Minisode 1: Blue Hour'. 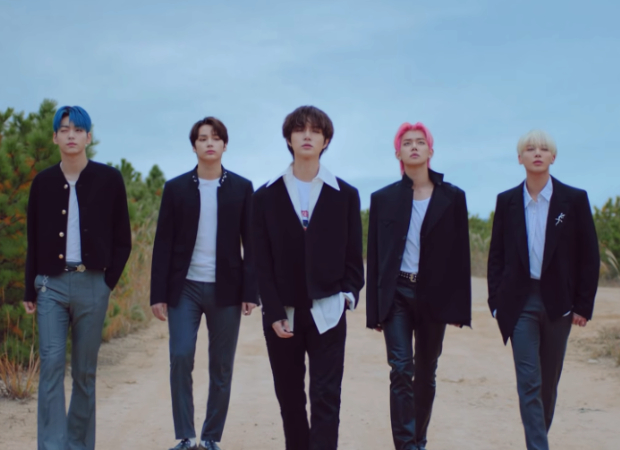 The music video kicks off with the quintet - Soobin, Yeonjun, Beomgyu, Taehyun, and Huening Kai - arriving at a Set in a deserted amusement park. It is indeed magic hour for TXT as they explore the park while they come across the flying cups, smoke bombs, UFOs, NERF guns, etc. Enjoying into the wild not worrying about the outer world and the chaos that has unfolded, TXT members find enjoyment in the little things in life. As the sun goes down, they face the reality. You see little callback to 'Eternally' especially during Yeonjun's part.

Compared to the Korean music video, this is more inclined towards the fantasy world. Just like the Korean version, the time stamp 5:53 p.m holds importance as it is when the sky looks ethereal but as the sun sets, it also brings darkness along with it. The song focused on wanting to live the moments that they couldn't due to pandemic. While they are moving on, the boys simply hope to be trapped in the magic hour and enjoy these beautiful moments before reality hits again. The retro-disco theme with pitch-perfect vocals is set in both whimsical and haunting feels with crisp extended dance version choreography and breathtaking visuals.

The Japanese album is also out along with the music video. The 10-track album includes songs like 'Intro: Dreaming' and 'Outro: Still' along with original compositions and some Japanese versions of their songs.

ALSO READ: TXT’s Yeonjun to make Korean drama debut with guest appearance in the finale of Live On