South Korea's rookie group Tomorrow X Together, under the label Big Hit Entertainment, is closing their 'The Dream Chapter' with their latest album, 'Eternity'. The album dropped back in May with title track 'Can't You See Me'. This was followed by B-side music video, 'PUMA'. Now, they have closed the chapter by releasing the last music video, 'Eternally' which is unlike anything we've ever seen. 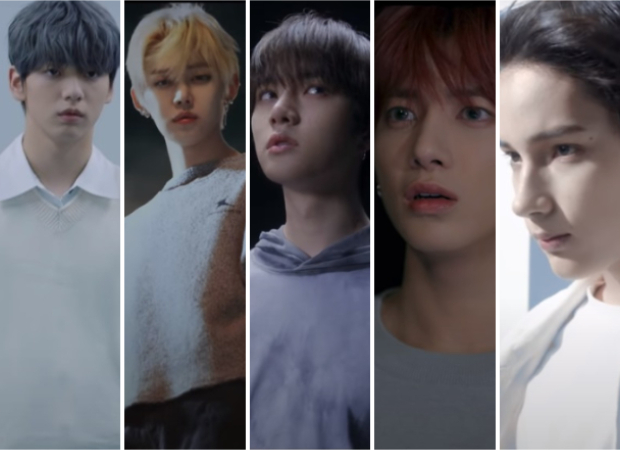 'Eternally' is an alternative R&B song in 'The Dream Chapter: Eternity'. It's probably the longest video ever going on for 19:31 minutes divided into seven sections. Every section tells the story of each member as they travel back and forth between past, present, and future.

The five members - Soobin, Yeonjun, Beomgyu, Taehyun and Huening Kai, are seen in an apocalyptic world in their nightmare where you see their alter egos. The horns on their heads definitely take you back to their music video 'Crown' from their debut album 'The Dream Chapter: Star'. Cut to the present day, all the members are in a dance rehearsal room. Soobin dreams about a very dark moment where the boys are seen in disorientated forms before he comes back to the present day and tries to analyze the situation. Looking at the mirror, the quote reads, "Is there any other option left for us?" He sees a light in the corridor when he is taken back to the past. The song's lyrics reflect the emotions, "Please stop / This nightmare I have every night / Your hands as if you're going to catch them/ Now tell me /  Name wandering around my lips / The meaning of this sad dream."

As the words in Hangul (Korean) read, "Whenever I wake up from this recurring dream, I always end up crying." Soobin is taken into the past where he meets a child who reminds him of Huening Kai. He is left heartbroken in the scene as he tears up as the song plays, "My heart sank into a maze of memories / Save me / The deepest part of the eternal dream / Deep sleep blue secret."

We are back to the present day where the chaos began with flickering lights due to earthquake. This time, Yeonjun ends up in a time where the world is on fire. It seems to a callback to their title track 'Can’t You See Me?' He is seen in an apocalyptic world where he finds his future self dead. His eyes meet the eyes of the wild cat which seems to be an ode to the music video 'PUMA'. "I opened my eyes and found out that night / The day of the fire rain / A nightmarish dance / Endless rhythm," this section perfectly syncs with the lyrics that talk about not able to live the happier times again.

The hangul words say, "Who's side should I trust?" Beomgyu reaches a time where he is standing in front of the room with Number '17' written on it after falling into a maze of mirrors. This seems like his present self seeing his future self. As he records what is happening inside the room, the alternate version of Beomgyu is seen fighting with someone before his body transforms. Now, according to the Bible, number 17 is a symbol of victory and perfection. It refers to spiritual perfection in the first place.

The darkness doesn't end as Taehyun reaches the fragmented world surrounded by a garden full of Pansies, hybrid plants. The flower is regarded as a symbol of remembrance. He sees his brother Yeonjun from afar and calls his name out loud. After several tries, he walks towards him before finding out he is lying there with purple blood overflowing.

Going by the definition of Purple, the colour often represents wealth, royalty, love, and grandeur. But, there's any interpretation to it which means this color also is used for sorrow and penitence. The connection is in association with Christ’s suffering.

Left completely gut-wrenched seeing Yeonjun's condition, Taehyun's heartbreak pierces through the screen. The lyrics depict his emotions, "Don't go breaking my heart / Don't go / Fragmented world / In the Forgotten Diary of the Two / Take me with that secret."

The hangul words state, "I can't get a hold of her no matter how desperate I'm trying to reach out." While the other four members were trying to protect the innocence of their youngest one in the darkest times, he tries to find them while he reaches a white door. Often, doors are symbolic of protection and shelter. His shelter comes from the presence of his older brothers. He opens the door to see all four of them on the other side of the door. It's the longing to live happily again. It is the door of opportunity for him to be with them which cleverly reflects in the lyrics, "This darkness that swallowed the scream / Growing gap between you and me / This graffiti before one's eyes / Swim back into your dreams."

SECTION 7 THE BEGINNING OF THE END

In a blink of an eye, the quintet is back to the rehearsal hall as they go back to their daily routine. You can see only Soobin and Beomgyu recall the memories of their fearsome nightmare as the words in hangul reads, "Was all this just a dream?" The dreams often represent negativity and fears. It ends with Soobin bringing back a flower with him as he looks at the mirror as the quote on it reads, "Remember my name." This starts the beginning of the chaos.

This music video proves how much faith the label has in its rookie group. 'Eternally' is an ode to their past selves that living in an imaginary magical world isn't always the best way. Every time they reached their peak of happiness, they were hit with harsh realities of life. As you grow up in this world, the magic slowly vanishes. The 'chaos' to come symbolizes, in Greek mythology, a state of random disorder existing in primordial emptiness. It is truly compelling storytelling we've watched in a while.