There's no stopping Tomorrow X Together. After dropping the first full-length Japanese album 'Still Dreaming' along with the Japanese version of the Korean song 'Blue Hour' which released in October 2020 along with their album 'Minisode 1: Blue Hour', they are set to release a music video for B-side track 'Way Back' from last their EP. 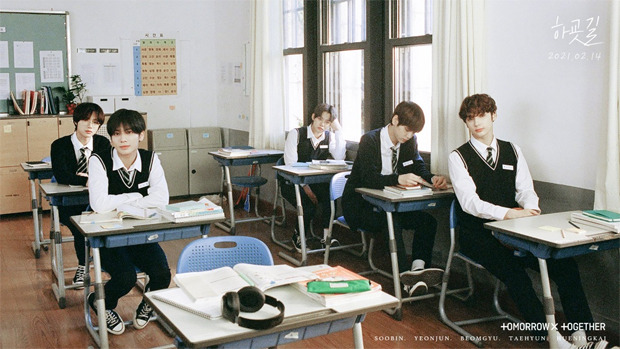 Dropping the teaser photos today, TXT members are seen in their school uniforms in the photos! Each solo posted had the song's lyrics written on it. Soobin's poster mentioned, "But when I call your name the sleeping star will soon wake." Yeonjun's poster said, "So that no monsters can chase us anymore."

Followed by Beomgyu's poster that read, "We could remember each other forever", and Taehyun's teaser photo that said, "We run together forever".

Huening Kai's poster read, "In my ear, I can hear our song."

'Way Home' is a song about the quintet reminiscing about memories while coming back home from school. Now, amid the pandemic and how lives have changed drastically, life seems a little unsettled when they are not following the same routine. At the end of the song, they leave with a hopeful message that no matter the circumstances, they will stay together.

Back in January 2021, TXT released their Japanese album along with the music video. The 10-track album included songs like 'Intro: Dreaming' and 'Outro: Still' along with original compositions and some Japanese versions of their songs.

ALSO READ: TXT wants to be trapped in the magic of aesthetically pleasing Japanese version of ‘Blue Hour’ music video