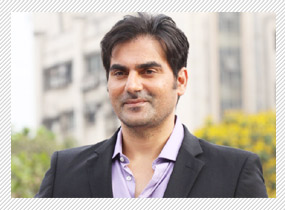 Dabangg 2 is less than 50 hours away from release and while it is understandable that during last couple of years gone by, Arbaaz was sure about what he wanted from the film, one can't deny the fact that Salman would have a huge say in the film as well. After all, other than wearing the hat of an elder brother, he also has a responsibility towards the audience as a much liked superstar.

Still, Arbaaz made sure though that at the end of the day, he wasn't overwhelmed with abundance of talent (read: Salman Khan and dad Salim Khan) around him and managed to live his vision to the core.

Smiles Arbaaz, "See, too many cooks spoil the food. Yes, everybody is experienced and their inputs are valid. However, at the end of the day, three key people during the making of a film are its writer, director and the actor. In addition to that there is a Director of Photography who sits with the director and helps him realise his vision on camera. Apart from that if you involve too many people then what may come on screen could be mishmash between too many visions."

Meanwhile Salman too was conscious of the fact that he couldn't quite afford to stay entirely aloof from what his brother had envisaged from him and engaged into conversations that led to a collaborative effort. More so since Dabangg 2 is as big a film as it gets and a product by itself that has nurtured him into a mass friendly superstar that he is today.

"Dekhiye, humein bahaut sambhal ke yeh film banaani padhi hai because we just couldn't afford to rest on our past laurels. Yes, this is a sequel and there is 'Chulbul' due to which when we were making the film, we had to think about those elements that stood out in Dabangg. We had to work together and take a conscious call on what did audience expect from this brand that had been set. There had to be songs, drama, action, dialogue-baazi and there was extra care taken to ensure that each of these elements was well woven into the screenplay. Trust me, it was some journey for sure", continues Arbaaz.

However, Arbaaz truly believes that the journey has been worth it and today when the film is super-hot amongst audience, trade and industry, there is a promise that he can make and that is about delivering a film which is as entertaining as it gets.

"I believe this film and the character has so much to offer that by default there is an entertaining film that has been made. After all, masala toh film ke basic premise mein hi hai and entertainment is in good abundance as well. While there would be my touch as a director which is pretty evident, you would still see a film that carries a flavour similar to that of Dabangg. After all, that is the basic expectation and I can't deny that. That's what audience wants, that's what Salman wants to give us well. No way can we afford to make an alien film; it has to be a true blue sequel."