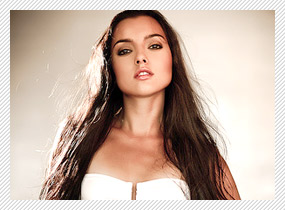 Hailing from Russai, Kristina Akheeva had been globetrotting as a model before she signed her first film with the Deols. She shares her experience of shooting for Yamla Pagla Deewana 2 with Screen

It's my debut on the silver screen and I am very excited about it. My character is a half Indian-half British girl, who lives in the UK and plays Sunny Deol's love interest.

The film-makers had been searching for the right girl for four months, and the schedule was about to start. After a brief meeting, I was asked to audition for some senses and dance. The next morning they called me to say that I am on board. It came as both, a shock and a surprise. I was completely overwhelmed and instantly agreed to sign up for the role.

I was in Russia, and then I moved to Australia at a young age. Five and a half years before Yamla Pagla Deewana, I was a globetrotting model. I spent one year in India in 2010, when I modeled for various brand. I came back in Mumbai this year to complete my last stint as a model before focusing full time on acting.

It was absolutely never-wracking. My main concern was to deliver the Hindi dialogues correctly. I did have a lot of pronunciation problems initially, but after that, my confidence grew dramatically.

Actually, the shoot want smoother than what I had expected. It has been an absolute pleasure working with the Deols. They have been so warm and I loved every minute of it.

There is one thing which was definitely a learning experience for me, which was that you need to be more patient. There's a lot off waiting around. As it's a team effort, it takes time for all the departments to synchronies. But when your moment comes and you are emoting in front of the camera, the wait is worth it.

I'm big fan Dharmendra; I got the opportunity to work with him in Yamla Pagla Deewana 2. He is a though professional, a true perfectionist and a very humble human being. I learnt a lot from him.

At present I'm focusing Yamla Pagla Deewana 2 as there are still some portions to be shot and we have to dub for it too. Regarding films, there have been a few offers coming my way, but I will talk about it at the right time.