The much-awaited film Thugs Of Hindostan is just a few days away from the release and one can already feel the excitement in the air. This Diwali release’s trailer might not have been unanimously liked by one and all but the grandeur, scale and an envious star cast has surely made it a film to watch out for. A huge opening is on the cards for sure but the question which is on people’s minds is – will it emerge as the biggest opening day grosser ever, beating Shah Rukh Khan’s grand heist drama Happy New Year (Rs. 44.97 crore) and the epic blockbuster Baahubali 2 – The Conclusion (Rs. 41 crore)? 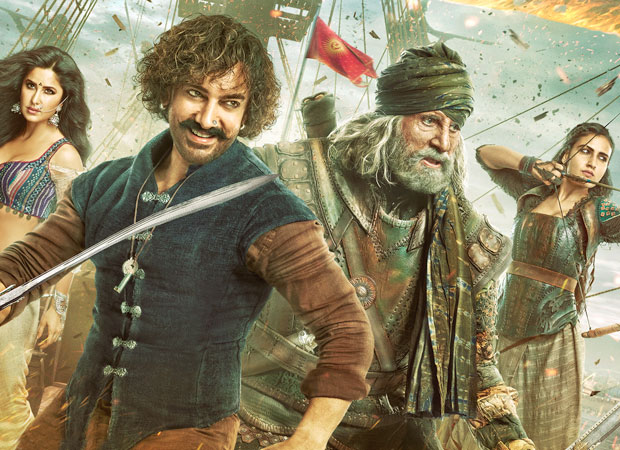 The trade experts definitely feel that it’s a possibility. Akshaye Rathi, film exhibitor and distributor, says, “If you look at the entire package and the elements that have come together in this film, it certainly has the potential to be the highest opening Hindi film of all times. After all, it has Aamir Khan, Amitabh Bachchan and Katrina Kaif in the cast, it has the scale, is backed by Yash Raj Films etc.” Trade analyst Taran Adarsh adds, “The screen count is going to be massive, ticket rates have been enhanced and moreover, it’s the coming together of Yash Raj Films, Aamir Khan and Amitabh Bachchan. All these factors should contribute to the biggest opening ever for a Hindi film.”

Trade expert Komal Nahta is also in agreement, “It can be the biggest opening of the year. It has two of the greatest actors of the country coming together. Moreover, it’s a film by Yash Raj and the scale is huge. And New Year is the biggest holiday in India. They have even increased the ticket rates, at places, on an unprecedented level. So all these conditions could create a situation for the film to become the highest ever opener”

Trade analyst Amod Mehra is supremely confident of the opening prospects of Thugs Of Hindostan. He confidently states, “It will be the biggest opening and would break all records, despite the trailer, music and advance booking not being up to the mark. There’s tremendous curiosity for this kind of cinema, which hasn’t been seen for a very, very long time. It’s the kind of cinema that Manmohan Desai used to make. So there’s a little nostalgia value attached to the film. So, Thugs Of Hindostan will be one of those keep-your-brain-at-home kind of movie. Though the trend today is of content driven film, but at the same time, we also enjoy illogical fantasy comic capers. It looks like an ideal Diwali entertainer. The movie should cross Rs. 50 crore in the first day itself. In the first 4 days, it can cross anywhere between Rs. 150 and 200 crore. From Monday onwards, the true picture will emerge.”

While talking about whether the Hindi version can cross Rs. 50 crore mark on the first day, Girish Johar, film trade and business analyst, asserts, “It might be a touch-and-go considering the increased ticket prices, extended weekend starting over and big names coming over”. Harveen Singh, distributor from Rajasthan, is not completely sure of it and says, “The opening should be somewhere in the Rs. 45-50 crore range. The first four days will be highly extraordinary. From Monday onwards, the merits of the film will talk.”

The music of the film hasn’t really worked big time. So can affect the opening or its eventual prospects? Almost all of them felt that it’ll not come in the way. Akshaye Rathi and Taran Adarsh came up with past references to prove their point. Akshaye emphasizes, “Every film has its own USP and there are films where the USP is music. For example, Aashiqui 2, barring music and to an extent the director had no other factor to make it cross the 90-crore-mark. But it still did. Most of the films of Rajkumar Hirani and Rohit Shetty are not really known for their music score but are known for their content, comedy, action, message et al. Similarly, in case of Thugs Of Hindostan, while many believe that the music is not up to the mark, there are so many other elements which has helped in generating excitement”

Taran meanwhile states, “There have been instances of music not working in a big way but yet the film doing very well. On the contrary, there have been films with chartbuster music and were expected to be blockbusters at the box office. But many such films have bombed at the box office. Remember the super-hit song ‘Kala Chashma’ from Baar Baar Dekho? That film was such a big flop. So from my years of experience, I have realized that it all boils down to the content.”

Komal Nahta however has a contrary view, “Suraiyya is a huge hit. Also, they have not popularized the songs and they must be having their reasons. But it’s not as if the songs have not worked. If it’s a small film and the music hasn’t worked, then you need to be tensed. And one or two factors need to be right. For instance, in Badhaai Ho, the music hadn’t worked before release. But the trailer had worked so well that it took a phenomenal start.”

Finally, does Thugs Of Hindostan have a chance in breaking the record of Dangal (Rs. 387.38 crore) and emerging as the highest Hindi film grosser of all time? The experts refused to predict as only once the film is out can they ascertain. Taran Adarsh says, “That would be too early to say. It can be gauged only after the trends that happen on a day to day basis.” Akshaye Rathi on the other hand states, “It certainly stands a chance. And in order to go past the Dangal number, it has to be an engaging and entertaining tale at the end of the day. Salman Khan is the same guy who has delivered a Jai Ho, a Tubelight, a Race 3 and even a Bajrangi Bhaijaan. So ultimately, more than the Salman Khan factor, it was the content, script and entertainment quotient that did the talking for these films. And if that’s present in adequate doses, then Thugs Of Hindostan surely has everything it takes to possibly be Hindi cinema’s highest grosser of all times.”

Girish Johar on the other hand makes a valid point, “Anything is possible. It can even go near the Baahubali 2 – The Conclusion figure (Rs. 510.99 crore). If the masses connect with the film, then sky is the limit.” Harleen Singh however says, “Crossing Dangal is a bit doubtful. That flm had a very powerful content. But I don’t know what kind of emotional connect Thugs Of Hindostan will have.”

Also Read: WOW! Amitabh Bachchan and Aamir Khan to groove for the first time in Thugs Of Hindostan's ‘Vashmalle’