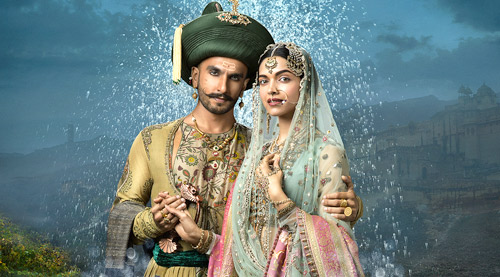 Like Satyajit Ray, Sanjay Leela Bhansali is the best person to understand the music that surges through the veins of his characters. The sound of Bajirao Mastani is

merges traditional raga elements with more contemporary sounds that would perhaps, just perhaps, jell with the average 20-something youth who probably doesn't know that sounds of music were at one


The soundtrack of Bajirao Mastani, alas, has no Lata Mangeshkar. But it has lots of Shreya Ghosal, Lataji's most melodious disciple. This girl can bend the most evocative lyrics into

seductive shapes ...and still leave us wondering if she's trying to tell us something beyond the lyrics.

she were making love to the poetry. Two excellent new female singers emerge seductively in 'Ab Tohe Jaane Na Doongi' and 'Fitoor'. In the former the singer Payal Dev pleads with her

lover to spend the night with her. The seduction is so sublime it skirts the spiritual. In the 'tamasha' ambience of the 'Fitoor' track Vaishali Mhade dazzles with her control over the


Layered luminous and expansive the 10 songs of Bajirao Mastani are shaped into curvaceous odes to an era when royalty romanced while the universe sang and danced in approval. Indeed the

songs are so elegantly arranged and so opulently orchestrated one wonders how the producers could squander the precious sounds by releasing them on the internet!


Imagine Naushad releasing his Mughal-e-Azam album on the internet. Or Laxmikant-Pyarelal pouring out the pure-gold sound of Parasmani on a portal!


The magic of melodies that somehow seems to have gone is revived in these songs. They sing to the spheres, hit the highest notes and ricochet into our hearts. The captivating chorus number

'Albela Sajan Aayore' may remind us of a song of that title from Bhansali's Hum... Dil De Chuke Sanam to begin with. But then the melody gathers a momentum beyond anything we've

heard. The numbers 'Gajanana' (sung by Sukhwinder Singh) and 'Malhari' (Vishal Dadlani) rise to crescendo of expressionism, thanks to the robust singing.


The most amazing aspect of this exhilarating soundtrack is that it recreates an era gone-by through sounds that are authentic but not blindly faithful to the period. The idea is to connect the past

with the present. And that, this album does with swimming sonority.


If there is anything like a soundtrack that is Maharashtrian in flavour and yet operatic, steeped in the classical ethos and yet contemporary, then this is where to look for it. The composer in

Sanjay Leela Bhansali throbs with a passion that belongs to an era gone-by. Almost lost. But retrieved just in time.