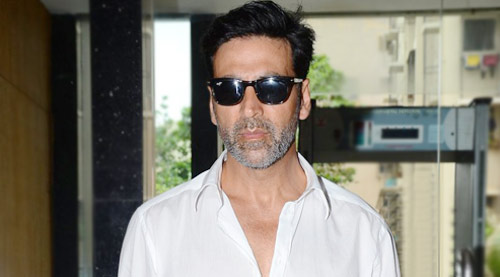 In the past couple of years, we saw Akshay Kumar taking on sleeper cells, terrorists and even the corrupt system in his own unique manner. And that in itself left us in wonder

about how patriotic is Akshay Kumar in real life and we realized that the superstar definitely has a strong bond with his motherland.


"I am proud to be Indian," said Akshay Kumar in a recent media meet that was held in Mumbai for Airlift. While he remained tight lipped about the ongoing Aamir Khan controversy or about his

fraternity people returning national awards, he definitely came in support of non-violence, which he believes is the best way to protest and solve issues. "Everybody has their own mindset. I

believe that anything that you can settle with non-violence is fine. It's your choice. Whatever you do, if you are not burning anyone's property, if you are being cordial, then it is fine."

Airlift is an upcoming thriller about the evacuation of 1,78,000 Indians from Kuwait to India during the Iraq-Kuwait war with Akshay Kumar playing the role of a businessman who masterminded

it. While his movie has a deep and strong connection to its homeland and the feeling of patriotism, Akshay also revealed what was that scene that touched his heart. "The scene (in the film) that

touched my heart was when the first flight of Air India landed at the airport to pick passengers which also has a song in the background. I am sure you would have seen it in the trailer when a man

hoists the Indian flag. I did not need any glycerin to cry in that scene and just looking at it, the people, and the flag was enough."


Supporting Akshay's statement was the director of Airlift, Raja Menon who described the meaning of patriotism as a deep unexplainable connection to home. "Patriotism comes from a selfless

act. When I come back home there is something deep down, a strange feeling that makes me feel at peace. That's patriotism for me. So it's (Airlift) an extremely patriotic film from that


What is also interesting is the extremely complex political scenario in India that had forced the Indian Government to maintain this entire episode of evacuation a secret. However, the film will

not thread into the unnecessary political areas but will only touch upon them, for as much is required to the plot. Filmmaker Raja Menon firmly maintained that the political elements are just a

part of the story but the complete focus will be on Ranjit Katyal and his attempt to save the citizens.


The entire team of Airlift is currently really kicked about the fact that the film will be one of the first big releases in 2016. Are they worried about the constantly rising censor troubles

and neither Akshay Kumar nor director Raja Menon is afraid of the board. While they assure that the film is solely based on the goodness of India and Indians, Akshay Kumar also added that he

wouldn't be surprised if the film becomes tax free.


If there is one thing that Akshay Kumar is known for, it is his ability to easily switch from the tough cop to a sardar who can tickle your funny bone. Versatility is the key and the actor finds it

rather an enjoyable experience when he gets to try such varied roles. "I like to challenge myself. It gets boring to do just the commercial kind of cinema. It's not like I don't do (commercial

cinema), I do it but I also like to balance myself by doing such films. Like, I am doing Rustom but I am also doing a Housefull 3. In fact, I continuously did Holiday, Baby,

Gabbar and I got bored. I am actually enjoying myself while shooting for Housefull. I am just trying to wrap up the few days' work and then I will go back to Housefull where you

can ham as much as possible," said Akshay Kumar.


Akshay Kumar is also a role-model for many fitness freaks owing to his healthy lifestyle but the honest actor admits that it isn't easy for him to maintain his body at the age of 50. "I am nearly

sports day, and the parents of other kids were 27-28 years old bringing their three year olds and I was 50."