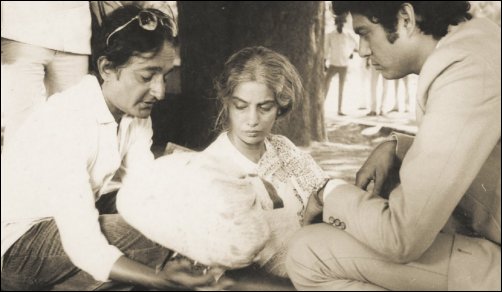 Playing strong assertive characters who constantly challenged male dominance came naturally to Shabana Azmi. From 1982 to 1986, Azmi did some of her most important work. These included Shekhar Kapur's Masoom, Gulzar's Namkeen, B. R. Ishaara's Log Kya Kehenge, Kalpana Lajmi's Ek Pal and Mahesh Bhatt's Arth. These were films that changed the way we defined the Hindi film heroine and also brought a radical reform in the way Indian woman was perceived by society at large.


However, cinematographer Pravin Bhatt's first directorial venture Bhavna is a very special film in Shabana Azmi's oeuvre. The film occupies a very special place in Shabana's glorious career and deals with the protagonist's journey in life. Azmi's skill of conveying emotions without being loud established Bhavna Saxena as a character far ahead of her times. In keeping with the tradition of the Shakespearean tragedies, the heroine stoically faces all hardships. Her journey begins as a starry-eyed girl who falls in love with the rich heir (Marc Zuber) who abandons her after marriage. Bhavna devotes her life to providing a good education for her son played by Master Makrand. When she is raped by her trusted employer (Saeed Jaffrey), Bhavna decides to use the only asset she has to ensure her son's future. She becomes a call girl. Reveals Azmi about her transition from a simple girl to a prostitute, "Pravin didn't want Bhavna to be a tame character and both of us agreed that she should become a prostitute; not the sanitised version you find on screen who does everything short of having sex. As far as I remember, I think I was the one who suggested the line I say to Rohini Hattangadi (who plays her friend), kis pe bharosa karoon? Ek ne pati hokar dhokha diya, doosre ne bhai bankar."


The transition from a simple middle-class girl in cotton sarees to the professional call girl who accompanies pot-bellied clients in luxury hotels is made ruthlessly. Bhavna is a gut-wrenching emotional drama. There is no room for mincing words or softening the blow. Life is hard for the single mother. And the script offers her no respite from the sweat and grind of making something substantial out of her son's life. The treatment of the heroine's destiny is never open to moral judgment. Bhavna does what she has to. The superbly scripted narration brings an emotional depth, which ensures that the audience never gets put off by the murkiness that Bhavna's life touches as she moves from one hardship to another in search of a future for her son.


The salvation and catharsis when they come, is achieved in Bhavna's death, when old and frail she breathes her last in her son's arms. The poignancy of the situation is felt in Lata Mangeshkar's rendition of Kaifi Azmi's lyrics, Mujhko dasti thi saanse meri banke naag, Aaj tuney chita ko dikhayee jo aag, Maut mere liye ban gayi zindagi.

Azmi reveals, "We were shooting at a park in Bangalore. There was a crowd of at least 5,000 people who were whistling, jeering and trying their best to disrupt the shooting. I had to die in my son's arms in the midst of all this hungama!" The only option left for the actress was to fall back on Stanislavksi, the Russian acting guru who is famous for his method acting. "He spoke about public solitude and that's when I understood what it means. With intense concentration I focused on the emotional undercurrent of the scene and the disruptions disappeared. Actors should have this ability to isolate themselves rather than get affected by extraneous conditions. I find this tough but over the years I have tried to master it."


What makes Bhavna an immensely moving film and arguably the most underrated masterpiece of Azmi's career is the undercurrent of doom. We know Bhavna is fated to receive blows all her life. And yet the structuring of the plot imbues her suffering with great grace. There are no moments of awkwardness in Bhavna's pilgrimage into motherhood and martyrdom. We come away from the movie with moist eyes and wet handkerchiefs.


The film, however, did not fare well at the box-office. Citing reason for its failure, Azmi says, "Probably my character's non-apologetic stance did not go well with the audience. The idea of the heroine opting to be a sex worker at that time was very shocking. Today the film would be accepted." Elaborating further she says, "It was not difficult to enact the dramatic scenes because they were substantiated by the script. I had no doubt in my mind that Bhavna was not a simpering victim but a fighter. Of course women face sexual harassment, more so if they are single or divorced. We need to implement laws that punish the culprits. Lataji's Tu kahan aa gayi zindagi and Ashaji's Dekho din ye na dhalne paye har pal ek sadi ho jaye poignantly brings out the film's tone."


I am surprised you remember Bhavna so vividly. Everyone has forgotten it. In fact the film's box office failure disappointed me so much that I directed a masala film Khoon Bahaa Ganga Mein. The film was a half hearted attempt as I wanted to break out from the groove of an art filmmaker. Regarding Bhavna, I think the concept of the heroine becoming a prostitute was not accepted by the audience.

My film was based on a true story that I had read about a French woman who had hidden her identity from her son and was funding her son's education in Switzerland. In the film too,


Shabana hides her identity from her son. It is Rohini Hattangadi who nurtures the child. I tried to justify the heroine's character. Today, when we talk about rights of sex workers, Bhavna's bold decision would be more acceptable.


I had worked as a cinematographer with Shabana Azmi earlier in Arth. We share a warm rapport. While I was doing the cinematography for Masoom, she asked me why I didn't direct a film. I was hesitant to offer her the role of a mother who metamorphoses into a prostitute and an old woman. When she heard the subject she loved it. Shabana had the author-backed role and she took up the challenge.


The producer of Masoom Devi Dutt (Guru Dutt's brother) agreed to produce Bhavna. Shabana who had earlier worked with Marc Zuber suggested his name and fortunately he agreed to do the lead role in this heroine-oriented film. Shabana was deeply involved with every aspect of the character including the clothes. I not only directed the film but was also the cinematographer.


Shabana received a best actress award for the film but I was not invited to the function. That's show business for you.