As Bollywood actor-director Sunny Deol turns 65 on October 19, actress Ameesha Patel wished him through a social media post. Interestingly, Patel shared a throwback picture from the sets of their superhit film Gadar Ek Prem Katha. Along with the photo, she also wrote a brief yet heartfelt note for the birthday boy. 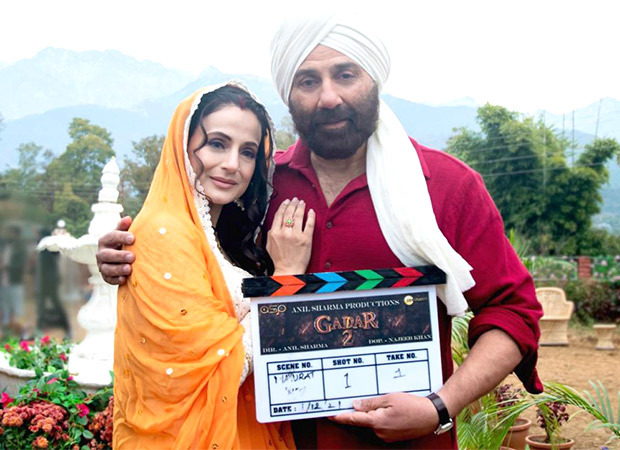 As Sunny Deol turns 65, Ameesha Patel gets nostalgic; shares a throwback pic from the Gadar set

In the photo, Ameesha and Sunny can be seen in the get-up of their on-screen characters Sakeena and Tara Singh respectively. The candid shot of the duo appeared to be behind the scenes. While Ameesha’s Sakeena is in a pink and white dress, Sunny’s Tara can be seen sporting a turban paired up with a blue kurta.

Instagramming the photo, Patel wrote, “A special throw back picture from the sets of GADAR 1 to wish my TARA SINGH @iamsunnydeol a v v v happppppy badly.” Further she added, “Who knew then that we were working on a film that was going to create cinematic history… and 20 yrs later again be on set for GADAR 2.”

The conclusion of her short write-up read, “lots of love always,” followed by a bunch of red heart emoticons. The Insta fam of the Race 2 actress flooded the comments section with wishes for Sunny.

Not only Ameesha, but Sunny’s son and actor Karan Deol also penned an emotional note for his father’s 65th birthday. In his note, Karan says, “In life I couldn’t have asked for anyone better to guide me through it always positive even during the darkest of times always pushing on no matter what , you are always by my side and I’ll always be by yours.”

Sunny was born on October 19, 1956, in Punjab. Apart from Gadar, he has been part of several movies like Ghayal, Jeet, Damini, Ghatak, and Border. Deol, who was last seen in R Balki’s Chup, will soon share the screen space with Patel for the second instalment of their 2001 release, Gadar 2.

Also Read: Ahead of Gadar 2, Ameesha Patel gets into the shoes of Sakeen as she signs a tee for a fan; watch