Known for some of the most popular films in Bollywood including Arjun, Ghatak, and Gadar, the ‘dhai-kilo ka haath’ hero, Sunny Deol was recently seen enjoying his birthday in Manali. The actor, who turned a year older, had shared photos from the final readings of Apne 2 along with his son Karan Deol. It seems that, since then, the actor is stationed in the chilly state and is enjoying the weather with his ‘gang’. On his birthday too, he was seen having fun with them and decided to enjoy some hot corn cob or ‘bhutta’. 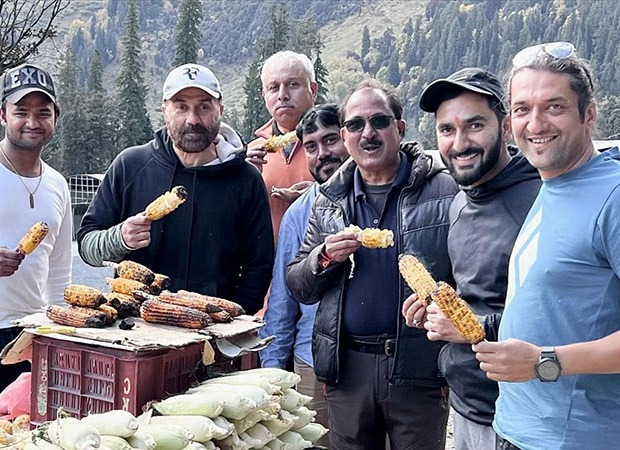 Sunny Deol takes out his ‘gang’ for birthday ‘bhutta’ treat

Sunny Deol shared a couple of photos from his birthday celebration which was a ‘bhutta’ session with his gang. The actor was seen all prepped to enjoy the freezing temperatures of the Himalayas in his puffer jacket and caps along with his friends. He posted the photo of them enjoying some street side hot ‘bhutta’ against the backdrop of snow-capped mountains and captioned it saying, “Birthday Bhutte Treat with Gang.” One of the photos also featured him trying to take a bite of his corn cob. Followed by the post, friends, family, and fans dropped their birthday wishes in the comments section. Amongst them were also his co-star Jackie Shroff and his half-sister Esha Deol.

It seems that Sunny Deol is loving the weather of the Himalayas and posted a series of photos earlier this week as he was seen chilling in Manali.

Speaking of films, Sunny Deol was last seen in the R Balki film Chup. The actor is all set to return with the Gadar franchise as the film Gadar 2 along with Ameesha Patel has already gone on floors. The Deol family is all set to make a comeback together with Apne 2 which will also feature father Dharmendra and Sunny’s brother Bobby Deol in lead roles just like its prequel. In fact, this one will also star Sunny’s elder son Karan Deol.