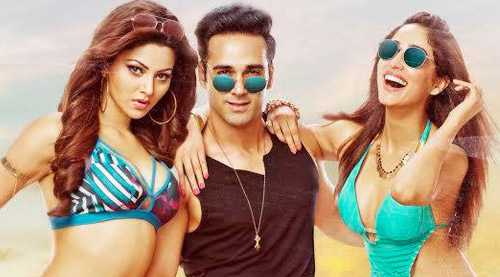 The one thing that can be said about Divya Khosla Kumar's film with certainty is that it sure beats watching the phony romance in this week's other romantic release Fitoor. Though honesty of intent may not per se be a virtue worth pursuing, it gives Sanam Re a head start over the other film which struggles to keep its head above the water.


Sanam Re stays afloat, thanks to the film's message on how love can take a couple through the most unexpected places. Hence Sameer Arya's camera picks on some of the most scenic spots in the world to hone the hues of love, heighten the romance, as the lead pair goes through various sections seasons and phases in life to create a graph for the lovers time together and apart.


Sanjeev Dutta's script is a romance with a strange, some would say, weird, twist. The two principal actors Pulkit Samrat and Yami Gautam have to act as teenagers and grownups, and then as older versions of their characters in an episode devoted to wish fulfillment. It's a tough call, and requires actors of great skill to carry of the transitions.


Pulkit and Yami, specially the former, do a fairly credible job of their characters' journey from first-love to heartbreak. I've said this earlier, but Pulkit is an actor waiting for the right role to give his talent that much-needed boost.


A large part of the narrative moves through episodic adventures that are hardly engaging in isolation but they all come together eventually at a point of irreversible heartbreak. The film's tragic last half-hour is shot with a great deal fluidity, with the songs especially the title track sung by Arjit Singh, going a long way in creating an atmosphere of unattainable love.


The music is, in fact, the narrative's mainstay. Director Divya Khosla Kumar uses the set pieces in a flow of abundant emotions captured on inviting sun-kissed and snow-capped locations.


Then there is Rishi Kapoor as the family patriarch struggling to keep his family business of photography alive during a time when civilization has switched to selfies. Such ideas of progress, or what we look at as progress in modern times, is well defined and ably projected into the drama. The entire episode of Rishi Kapoor and his little grandson (who grows up to be Pulkit) is very evidently inspired by Guiseppe Tornatore's classic study of nostalgia and love Cinema Paradiso.


Luckily Sanam Re doesn't aspire to greatness. It just wants to tell a sweet tender simple honest tale straight from the heart. To that extent it succeeds in its endeavour. There are superfluous characters such as the hero's boorish insufferable boss and a sex-addict yoga guru (Bharti Singh) who are keen to spoil the romantic mood.