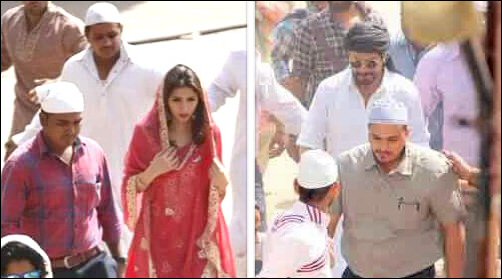 Shah Rukh Khan, who has been shooting in Gujarat for his upcoming film Raees, has to face several hurdles before he wraps up the schedule in the state. Owing to his statement on 'intolerance' which he made on his birthday that is November 2015; the superstar continues to face trouble by Vishnu Hindu Parishad (VHP) activists and others and was now attacked in Ahmedabad.


Shah Rukh Khan, who was recently in Sarkhej Roza in Ahmedabad shooting with the team of Raees, had to face protests from VHP activists who refuse to allow the actor to shoot in their state. In fact, stones were hurdled at the superstar's car (Mercedes) which was parked outside the Hyatt Regency in Ahmedabad. There was also a BJP Yuva Morcha protest wherein the effigies of the actor were burnt by the activists who were screaming 'Jai Shri Ram' along with anti-Shah Rukh Khan slogans. Shah Rukh Khan was at the popular historical monument with co-star Mahira Khan to shoot a 'nikaah' scene which further miffed the devotees at the dargah who had face to delay owing to the fact that the doors to the Roza were closed due to the ongoing shoot of the film.

As of now, the police is investigating the matter and according to Inspector Rathod after a lot of research and a CCTV footage, a persona named Nilesh Arya has been identified as the active member of VHP and has been arrested under several sections of the IPC which includes 143 (Punishment), 147 (Punishment for rioting), 336 (Act endangering life or personal safety of others) and 188 (Disobedience to order duly propagated by public servant).


Earlier when Shah Rukh Khan had entered the state of Gujarat for the film, he along with his little son AbRam was attacked by several activists in Bhuj.