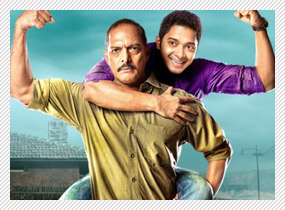 If you can overlook the outrageous suggestion that Nana Patekar could be Om Puri's son then you're in for some clean healthy wholesome and engaging fun in this comic drama about a stranger who walks into a Catholic village and changes malfunctional lives with his positivity.

Does the reformation in the Church theme ring a bell? Films of Hrishikesh Mukherjee (Anand, Bawarchi, Budha Mil Gaya, Khubsoorat) attempted the same theme of the whimsical but endearing stranger who walks in with an eccentric agenda to change jaded lives.

Priyadarshan's parodic populace is a city of eccentricity. Rural or urban, the characters are whimsical, stubborn, and oddly out of step with the socio-political reality of the world that they seem to inhabit from the fringes without being able to position themselves in the mainstream.

Kamaal Dhamaal Malamaal (KDM) gives us Priyan's people at their quirkiest. There is a farmer Om Puri, his wife (Sona Nair) two daughters and a wastrel of a son (played with superb slothfulness by Shreyas Talpade) in whose life comes a dark brooding stranger Nana Patekar who be any of many things....a long-lost brother, an unwanted bother, a ghost from another world, a blast from the past, a foodie who clean-sweeps all the food on the tableâ€¦fast! Leaving Om Puri's family pooree aghast.

It is interesting to see how Priyadarshan brings into play a small church-based village community's affinity to religion, courtship and domestic politics. Here is a village sustaining itself at the grassroots with spirited hilarity, often self-directed. Though a little tongue-in-cheek if not altogether blasphemous, I was tickled by the heroine's female body-guard (Pratima Kazmi)'s one-sided passion for the priest played with Asrani in an ill-fitting cassock. This audacious plot-track was more outrageously comical than newbie Madhurima Bannerjee's endless courtship with the eminently unlikeable wimp (Talpade).

This isn't the first Priyadarshan film where the pampered heiress is protected from male attention by her slew of bullying brothers. Earlier Kareena Kapoor was similarly cordoned off from Akshaye Khanna's attention in Hulchal.

Recurrent themes often give Priyadarshan comedies a sinking sense of sameness. KDM is one of Priyadarshan's better potboilers in recent times. KDM is a remake of a Malayalam film Marykundoro Kunjaado. Priyan hasn't been able to do away with a regional flavour in the story. The cloistered gossip-mongering Keral village may seem odd to Hindi-speaking audiences. But the film has been shot by R.Ganesh in a beautiful lakeside township .There are lush images of fields and meadows. The climactic chase catches Nana and Shreyas running through a harvest-ready field in the dead of the night. It's an arresting image, framed and shot with care.

Though Neeraj Vora's dialogues have seen better digs, they capture the ethos of eccentric antics well. The actors are all in the mood to have fun.

Tucked away in this rumbustious drama of mistaken identity and godforsaken raillery is a message on trust, belief and honesty. All of this is put forward with zero dependence on vulgarity. The double meaning is restricted to the ambivalence of the characters. The principal actors specially Nana Patekar (duly deadpan), Shreyas Talpade (blissfully and brazenly selfserving), Om Puri (incredibly unselfconscious), Paresh Rawal (wickedly ironic) and Neera Vora (a scream as a coffin maker who prays for the dying to be dead) get into the swing of things. They lend a layering to the laughter.

An interesting film, and far superior to the prolific Priyadarshan's other recent comedies like De Dana Dan,Khatta Meetha and the prequel to KDM, Malaamaal Weekly.