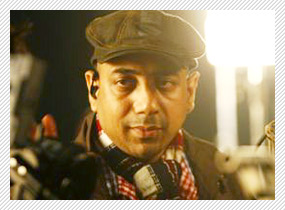 His Ek Chalis Ki Last Local (2007) had released more than half a decade ago. Ever since his much appreciated directorial debut, Sanjay Khanduri was waiting for just the right subject and combination of actors before embarking upon his next outing. This happened in the form of Kismet Love Paisa Dilli a.k.a. KLPD, which has been presumed to be a sequel to Ek Chalis... , though the fact is that this is far away from truth. With just a little over a week remaining for his second coming in Bollywood, Sanjay talks about the film, its genre, setting and of course the lead pair of Vivek Oberoi and Mallika Sherawat.

Vivek Oberoi took a long break after Rakht Charitra (2010). How did you manage to bring him on board for KLPD?
Within seven minutes of the film's narration (smiles)! He had actually seen Ek Chalis Ki Last Local and liked it. He had shown interest in working with me and had said that if there was something good I had to offer, he was game for it. Later when the idea of KLPD came to me, we met again. Believe it or not but for our narration, all I had was the first seven minutes of the script. I narrated that to him and he confirmed there and then that he was doing it.

Really, was it that simple?
Arrey simple nahi, bahaut difficult tha! When you have limited material in hand, you have to make all the more smashing first impression in what you sell. The journey, after he said yes, was all the more memorable for me. It has been one and a half years since then as fleshing out the script itself took seven months. I guess Vivek too was waiting for just the right film for his next lead outing and showed immense faith in KLPD. Similarly Amit Chandrra (who was the Associate Producer of Karthik Calling Karthik) was happy that we were going in the right direction.

In this journey of yours you also roped in Mallika Sherawat....
(Smiles) Yes, we wanted more budgets for the film which means a heroine had to be someone who was nothing less than a firebrand and had a good massy fanbase. Mallika always carries a good buzz around her and she perfectly fitted the bill. It is this combination of Vivek and Mallika that helped the film garner the kind of money which was required to mount it at a good scale. Suddenly their combination turned out to be really scintillating.

Meanwhile how did you ensure that despite a similar premise (story of a night) KLPD turned out to be different from Ek Chalis...?

That was actually a major challenge. It was imperative for me to change the flavour in such a manner that my all gags remained unique and entertaining while still being in the same paraphernalia of a single night. I had to know my characters very well and the interaction between them all had to be so unique that leave aside drawing comparisons with Ek Chalis.... , people could exclaim that they hadn't seen anything like that before. In this process my personal experience of living in Delhi helped a great deal.

One can see though that KLPD is much more polished in terms of budget, scene setting, sets, song-n-dance routine etc.
Yes, indeed. KLPD is a much bigger and brighter film to look at. This film is more of an outdoor experience and with Delhi as a backdrop; there is all the more glitz and glamour that comes in. The city is known for being the fashion capital of the country after all. Then there are politicians also who come into the story due to the city's political backdrop. In addition this is a very strong community based city so Sardars step in. I can assure that KLPD will really show what Delhi is all about.

For someone like you who had to wait for five years before seeing a film of yours hit the screens, KLPD must be a bag of mixed emotions, isn't it?
Honestly, it has not been an easy period. When you are sitting and waiting for things to happen and you have to do everything all by yourself, at times even your own conviction takes a toll. In the last five years, my endeavour has been to do what I believe in. More so because it is a known fact that it is your second film that dictates whether you are a fluke or someone genuine. This is what turns out to be a really crucial step.

So what next then? A hat trick of films set in one night in a particular city?
(Laughs) These two films with a common premise have really worn me out. I don't think that I can make a film about one night anymore!