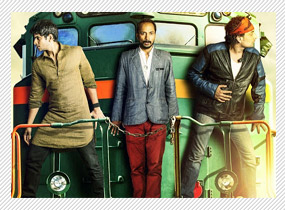 To come across a film with so many talented actors all under one roof is a delightful experience. Chal Bhaag is one of those hectically plotted adventure stories where the fast flowing fund of ideas and words indicate the presence of minds that understand the grammar of commercial cinema.


The film is shot on location on the crowded streets of Delhi. In the chase sequences, of which there are plenty, we see onlookers staring startled at the actors as though trying out if these are actors or just desperadoes on the run. The film does wear a rugged outdoor feel. Hence the camaraderie among the male actors works better than the romantic dalliance between a sullen lover-boy (Varun Mehra) and a mafia don's mistress (Keeya Khanna) that is thrust into the plot.


There are some mildly amusing incidents involving cops on duty. Yashpal Sharma as a harassed cop with a nagging wife on the phone is entertaining. The very talented Deepa Dobriyal as a big-talking petty criminal with a razor-sharp tongue gets a hang of his part and has great fun with it. Debutant Varun Mehra as the sulking Romeo is adequate. But the very talented Sanjay Mishra, so brilliant recently in Aankhon Dekhi, is again wasted. He is one of the many characters who add to the hustle and bustle.


An interesting and original plot which moves at a hurling tempo Chal Bhaag has its interludes that work. But too many characters and a constant quest for quick-wittedness makes this an exercise in breathless one-liners of the kind that comedians exchange on television.


Sample this: a distressed woman says to a cop, "My husband left home last evening to buy potatoes and he hasn't returned as yet."


To this the cop on duty (played by another gifted character actor Mukesh Tiwari) says, "That's okay. Cook another vegetable."


Giggle during times of gore.

Sanjay Mishra says his father would be proud…