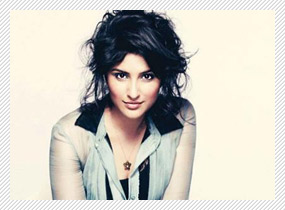 Parineeti Chopra loves Priyanka Chopra, but is somewhat wary of her star-cousin's name being mentioned every time Parineeti is being discussed.


Parineeti doesn't see Priyanka as competition at all. "How can Priyanka be my rival? She is been here so much longer. I think I am lucky that I am known after just two films as more than Priyanka's cousin. People say we're both good actors."


Like Priyanka, Parineeti is a trained singer. Says Parineeti, "It runs in the family. My dad and Priyanka's dad are brothers. They used to sing together on stage. And when Priyanka and I were kids, we performed on stage together. So yeah, I love singing. If I get a chance to make a dream singing debut like Priyanka, I'd grab it. Maybe later. And I also love reading. But most of all I like sleeping. That's when I regain all my energy. Then I go out and act."


Parineeti says she comes from a background where self-discipline is a precondition. "I was a focused student in school and college. I want to continue that way as an actress."


As for stardom, Parineeti rejects it at the moment. "I am not a star at all! Stardom comes after years of work. It doesn't happen with two films. Let me get a solid 7-8 years of work done before we talk of stardom for me. I'm just lucky to be here at a time when audiences are willing to watch newcomers. Yeah, I do enjoy being recognized on the streets. If that didn't happen, I'd be really depressed. My aim is to be known by everyone who sees films. I don't want any viewer to ask, 'Parineeti who?'"