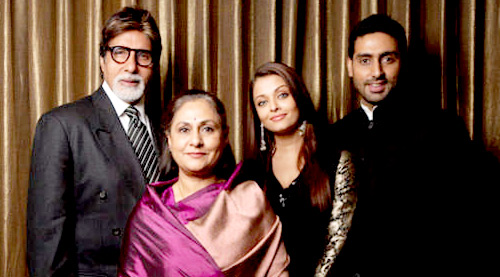 Call it coincidence but 2015 could well be the biggest ever for the Bachchan family. Between them, over half a dozen films are already in the making, which

brings this 'parivaar' on the forefront of Bollywood this year.

Shamitabh (February 6)
- With Balki as the director, one expects yet another unconventional affair on screen. Big B and Balki are a team after Cheeni Kum and Paa. Now with Dhanush in the fray,

Big B is firing all cylinders. He won quite some acclaim with the aforementioned films and is pretty much enjoying the show in Shamitabh as well.

Piku (April 30)
- While Deepika Padukone is playing the title role of Piku, it is her chemistry with Amitabh Bachchan, who plays her pot bellied dad, which is already making good buzz. Shoojit

Sircar and Big B have a lot to show the world after their unreleased Shoebite.

Wazir (Release date to be announced)
- Even though just a glimpse of what is in the offering has been revealed in the dramatic teaser of this Bejoy Nambiar film, it is pretty much on the cards that along with Farhan Akhtar,

Big B would make Wazir an intense affair that also boasts of an original storyline.

All Is Well (July 3)
- Ok, so the film has been pushed ahead by almost a year. Still, for Abhishek Bachchan, this one is special as Umesh Shukla is wearing the director's hat again after OMG - Oh My

God. Though he has scored a hat-trick with three centuries (Happy New Year, Dhoom 3, Bol Bachchan), with All Is Well Abhishek is going solo.

Housefull 3 (To go on floors in 2015)
- He is the newest entrant in the Housefull series and rest assured, the fun guy in him would add a lot to the plot and narrative of this Sajid Nadiadwala franchise. Though in all

likelihood the film would be released in 2016, it is pretty much a given that it would be a laugh-a-minute affair with grand canvas to boast of.

Hera Pheri 3 (To go on floors in 2015)
- In true Firoz Nadiadwala tradition, Hera Pheri 3 has been launched in style. This is yet another franchise where he is the newest entrant, and along with John Abraham he has a

task in hand to fill Akshay Kumar's shoes. His comic timing should do the trick.

Jazbaa (Release date to be announced)
- When the script reading session of a film starts trending on social media, it is pretty much a given that this comeback vehicle would be talked about for weeks and months to follow.

With Sanjay Gupta making Aishwarya an offer that she couldn't refuse, the lady is said to have bagged a role of a lifetime. This one is going to be huge.

Ae Dil Hai Mushkil (To go on floors in 2015)
- With a star cast comprising of Aishwarya Rai Bachchan, Ranbir Kapoor and Anushka Sharma, Karan Johar has pulled off a coup no less with
Ae Dil Hai Mushkil which he is also directing. For those looking forward to a classy, colourful and character driven film, Ae Dil Hai Mushkil is said to be a treat in the

Hera Pheri 3 (To go on floors in 2015)
- Will she, won't she? No one knows that. However, buzz in the air is that Jaya Bachchan has been extended an offer to play Abhishek's mother in Hera Pheri 3. While it is being

rumored that she is playing a quirky character in the film, there has been no official confirmation yet. If she indeed opts for this one, 2015 would indeed have the entire Bachchan