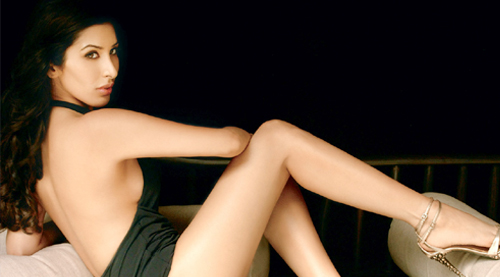 Were you disappointed to be eliminated?

How do you look back on your Jhalak journey?

It was emotional, physically and mentally exhausting but memorable! I don't think people comprehend just how demanding the show is. I never do anything half-heartedly so I completely dedicated myself to Jhalak for the past 15 weeks and it's been quite a journey!

You carried yourself with great confidence?

I'm proud to say that I was the one contestant who wasn't a trained dancer and yet every week I tried a new dance form... jive, bachata, contemporary, aerial, hip hop, acrobatia, paso doble! I also became known as not only the oomph factor of the show but the Queen Of Avtaars!

How much of the credit would you give to your choreographer?

My choreographer pushed me no end in spite of my previous slipped discs and during the course of this journey I realised that I was versatile and stronger than I thought. People realised that too and I think I made a place in the judges and audiences' hearts. Isn't that the point of the show?

Which were your most memorable moment and experiences?

Most memorable was definitely getting my first 30 marks with the alien act because that act was insanely tough! Also performing the Mr.India act in front of Salman Khan, him narrating our bike ride story and us singing together. And definitely when Bebo (Kareena Kapoor) came on the show.The fact that she said she was proud of me as a friend and wanted me to win really touched my heart!

My not so favourite moment was, coming in the first face off because I really felt I didn't deserve to be there so early on but it did get my fighting spirit going.The worst moment was when the background dancer forgot to catch me in one act. I was already battling a back injury, I worked through it all week on a super tough act of acrobatics in water, I was surviving on pain killers and injections and for him to let me fall flat on my spine in the act totally devastated me. I got badly injured but didn't make a drama of it so no one took it that seriously! They only realised afterwards what a bad fall that was!

This season there were several unexpected hurdles like the teen ka tadka, you also suffered an accident. How much did these impede your potential victory?

Teen ka tadka was there last year as well and our act this year was fantabulous! In fact despite my elimination the judges asked us to perform it before leaving... Everyone was talking about our act all weekâ€¦ Elli, Deepak and I worked really well together and when the judges saw it they said it was a 30-marks act! I'm glad I left a mark even upon my exit! So much so that even in the face off the judges apparently asked the team if there was any way of saving both Akshat and me!

Who was your favourite judge, and why?

Madhuri ji was always so kind to me. She called me beautiful and graceful for 13 weeks... Not a single week went by without her appreciating me which meant a lot coming from her! But I definitely had a soft spot for Karan Johar. He is very correct and knows just what to say. He has wit and heart and that's a great combination!

What did you think of the level of competition offered on the show?

It's a known fact that this season was the toughest! Everyone was a competitor from day one! And of course this year they got 2 professional dancers on the show - Tara Jean and Shakti. So that made it even tougher!

Who according to you is likely to win this season, and why?

I think Punit and Mouni have been the favourites to win this season and once they got the immunity ball it became more obvious. Nonetheless it would be nice for a non-TV artist to win for a change and the only one left is Akshat! He's a special little kid and I wish him happiness and success always!

Have you made any lifelong friends during Jhalak?

Yes...but mainly people who were behind the scenes! I met some really wonderful people and I hope we will always be friends! And of course my team who became like family over the past 15 weeks!