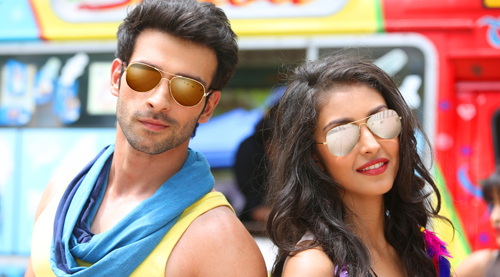 It is time to welcome yet another pretty young woman from the beauty queen background. Navneet Dhillon, Miss World 2013 contestant, is making her big screen debut this Friday

with Loveshhuda. The Sikhni from Punjab made her way from modeling to the world of films in quick time. To her good fortune, she bagged a romcom with a twist in the form of

Loveshhuda. In an unconventional set of a love story that starts in bed, only to become something all the more exciting and heartwarming in quick time, Navneet knew that the quirky theme

would lead to an unusual romantic debut for her. Over to Navneet!

You are a young Sikh girl from Punjab. So how do you find Mumbai treating you so far in the world of glamour?

It hasn't been difficult to adjust (smiles). I come from an Army background since my father is an Army officer. I have been all over the country, be it Coimbatore, Allahabad or Manipur. I have seen

almost every state of the country. Even in Punjab I have lived in different cities like Bhatinda, Firozpur and Patiala. So when I came to Mumbai, it was like any other city for me. Reason being

that I can adapt to new places quite comfortably. The only issue in the beginning was to stay alone as I have not lived apart from my parents ever.

How did you cope with that?

Now my father is in Mumbai and we stay in Colaba. However, the interim time period has helped me being independent instead of being a Momma's girl (giggles). Otherwise I have always been my

mother's baby. Even if I had to go to a shop next door within my colony, I would take my mother along. So when I came to Mumbai, I was surprised with myself that I could do things on my own. So

yes, today my parents are really proud of me.

With your debut film set for release, it could well be another major proud moment for them. That said, Loveshhuda is also the first ever love story in Bollywood that starts in bed. Were

you totally zapped when you heard about this plot point?

I was a little bit apprehensive at the beginning but that's about it. When I started shooting for it, there was no such doubt. See, the film is very real and audience would fall in love with the

characters that Girish and I are playing. Moreover, the film as a whole is also beautifully designed by our director (Vaibhav Misra).

How has he turned out to be as a debut director?

He is really sorted. In fact at times the situations used to be so real that I used to ask Vaibhav is some of these were related to his own life (smiles). This is when he told me that he had seen

such things happening to people close to him. As for my own part Pooja, I really like her as she doesn't regret what does, just like I don't regret anything that I do either. In many ways, we are