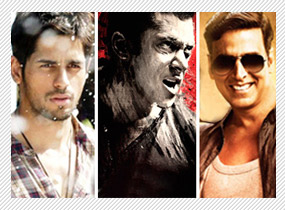 Simply put, there are seven films that have no super-star in them - as in Salman Khan, Aamir Khan, Shah Rukh Khan, Ajay Devgn, Akshay Kumar and Hrithik Roshan - that have touched the 100 crore domestic nett benchmark.

A technical point here: Since a superstar's prestige was not involved, we could safely assume that collection figures were completely genuine across media analysts and production / distribution companies! So, if it is a good product, the star quotient is of little importance! Check the fact that Ek Villain is still in the movie halls and its final collection (or lifetime, as it is termed today) may equal Salman Khan's Jai Ho or even Akshay Kumar's Holiday, the highest grosser till now this year.

But in this 100 crore club that signifies mass acceptance, this audience shift has been perhaps witnessed only from mid-2012, when the first unlikely member of this club - Barfi! - reached that landmark. Not only did it reach there quicker than Golmaal 3, Singham, Housefull 2 and Bol Bachchan, but it also made a new star - the promising Ranbir Kapoor - enter the elite league, breaking the till-then 100 crore monopoly of the top six! It also outclassed the last two films (also 2012 releases) mentioned in lifetime collection, despite not being an out-and-out comedy or entertainer.

Ranbir's next release, Yeh Jawaani Hai Deewani, the 100 crore club opener for 2013, seemed to consolidate the Ranbir raj, with the benchmark achieved in seven days, a feat next only to Dhoom 3, Chennai Express, Krrish 3, Ek Tha Tiger and Dabangg 2, all of which took just three to six days to achieve this benchmark.

However, with his very next release, Besharam, Ranbir Kapoor came a cropper, proving conclusively that Barfi! and Yeh Jawaaniâ€¦ had made the grade not because of him alone but perhaps with some contribution from his presence.

But it was 2014 that really showed that while superstars were absolutely fine, content was finer! And the first and major surprise was 2 States, a romantic comedy featuring Arjun Kapoor and Alia Bhatt. With Ek Villain also making it, the audience verdict is loud and clear: make a truly great package, and they will reward you with more than 100 crores -superstars optional!

After all, the profit margin will be far bigger compared to the high-budget big-six-stars' extravaganzas - even the forthcoming Kick, which is a walkover for membership to this club!

It has been axiomatic that films run, not stars. Films make stars and superstars, not the other way round. But while the superheroes may be showered with the credit for their films' huge business, the fact remains that other elements in the package, like the brandings and statuses of the producers and directors, the music, the heroine and even the marketing and release timing - besides the all-too-vital script and dialogues - do influence any film's fate. And this ironically becomes clearer when the name of a Khan, Kumar, Devgn or Roshan is missing from the roster!

So perhaps it is a happy situation that we can be forthright in analyzing the real reasons why these seven films turned out to be the seven box-office wonders!

Barfi! (Director: Anurag Basu): In the words of an eminent trade analyst, the film's timing was perfect - it came after an overdose of spice (action, comedy or a blend of both) - Agneepath, Rowdy Rathore, Housefull 2, Bol Bachchan and Ek Tha Tiger. Other than the dhoom-dhadaka music of Rowdyâ€¦, there had been no outstanding music or sweet tale of romance in 2012, and Barfi! filled up the deficiency, thanks to Pritam's melodies and the idealistic love triangle shown in the film.

Add Anurag Basu's deft direction (including the alleged rip-off scenes and plots from world classics!) and super-fine performances from Ranbir as a mute and Priyanka Chopra as an autistic and a fresh, bewitching North-Eastern locale for the romance and you had a hit recipe. The whole package just synergized.

Yeh Jawaani Hai Deewani (Director: Ayan Mukerji): To be clinically right, Pritam this time could take credit for at least a third of the Rs. 190 crore revenue that this film made! The music took the nation by storm, come 'Budtameez Dil', 'Balam Pichhkari' or the other numbers and the tangential look at a formula love story was an instant hit, the songs picking up even more after the film's release and contributing to repeat value, as in films of yore.

Add the Dharma Productions' marketing and promotions, and the first evolution of Deepika Padukone into a versatile big star with a Barfi! -fresh Ranbir, and the film explosively slashed through the multiplex-single screen barrier. The vacation season and the public curiosity over real-life ex-lovebirds Ranbir and Deepika showing a super-sizzling reel chemistry helped - but only helped.

Bhaag Milkha Bhaag (Director: Rakeysh Omprakash Mehra): What made the paying public take to this biopic after they rejected those of more important people is a riddle best answered by the smart promotions, justified by the gripping screenplay and dialogues (Prasoon Joshi), the authentic detailing and hard work from the team, especially Farhan Akhtar. The intrinsic connect of this real story of the triumph of human spirit also added up to a critical and commercial victory. This time, the music by Shankar-Ehsaan-Loy too helped, with Joshi's lyrics standing out.

Grand Masti (Director: Indra Kumar): This time, the critics were baffled - how could the people take such a film, full of sexual jokes and innuendos, to the coveted benchmark? Quite conveniently, it was forgotten by both critics and intellectuals that it was the same audience that loved Bhaag... that endorsed this as well!


Moral: Those who love shawarma also loved vada-pav! So give the people higher than their expectations and chortle all the way to the bank! Not only was this film (starring Aftab, Vivek Oberoi and Riteish Deshmukh) seen by youngsters (in groups as well as couples) but also by older men and women in groups and twosomes too! So much for sex being strictly for the Indian closet!

Goliyon Ki Rasleela - Ram Leela (Director: Sanjay Leela Bhansali): A Yeh Jawaaniâ€¦-Chennai Express-strong Deepika Padukone was the star ace of Bhansali's Romeo-Juliet adaptation, but Ranveer Singh graduated from a new hero (with one hit, one average film and a flop behind him) to an actor ("Sanjay-sir made me shed my inhibitions!") with a starry aura. The epic scale, the emotional intensity and the 'wow' music and aura completed the magic.

2 States (Director: Abhishek Varman): Though based on the bestseller popular novel by Chetan Bhagat, this romantic comedy broke the jinx on Indian novels not becoming successful films. A newbie director, Abhishek garnished the brilliant script with high quality elements in romance, drama, comedy and emotions that appealed to all, slaloming Arjun Kapoor, Alia Bhatt and himself into the 100 crore league. Shankar-Ehsaan-Loy's music was strong too, as were all the main performances.

Ek Villain (Director: Mohit Suri): Not only was a frenzied anticipation developed by the promo 'vibe', but the film fulfilled much more. The music was already a hit before release, and the fresh script, Sidharth Malhotra's loyal fan following, the redoubtable Riteish Deshmukh and the petite Shraddha Kapoor did the rest of the trick. Of course, the ek hero was the director, who had to prove a point in his first film outside his home banner, which he stunningly did! Even the justified violence was endorsed because of the strong positive messages.