Even before the release of Parmanu – The Story of Pokhran, John Abraham was seen juggling between schedules. Reason? He has been shooting for his next film Satyameva Jayate simultaneously. It seems that the makers of the said film were keen on releasing it this year itself. Keeping it in mind, they have gone ahead and announced the date of release of Satyameva Jayate, which will be August 15. Furthermore, a new poster too has been unveiled. 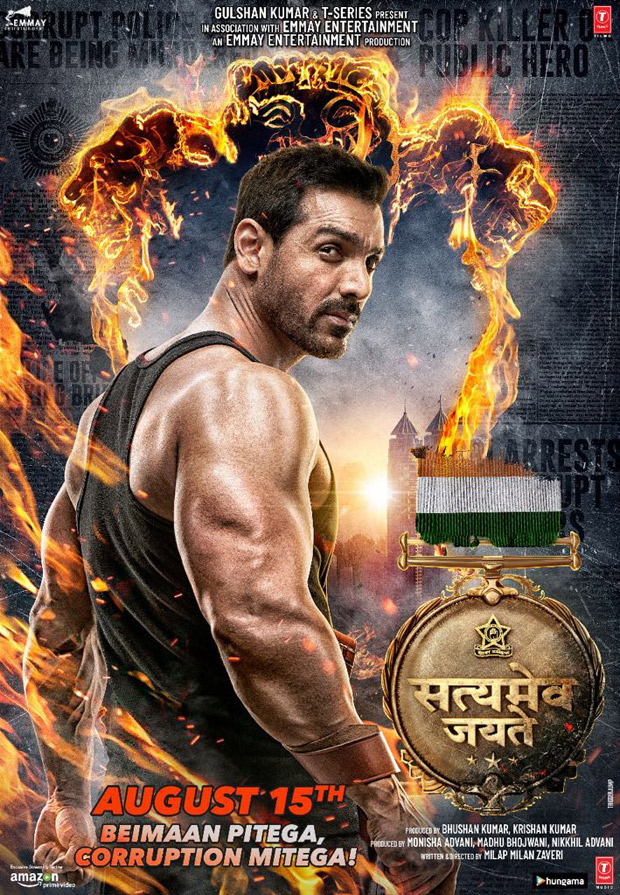 Satyameva Jayate: John Abraham looks fierce and intense in this new poster of the film

In the said new poster of Satyameva Jayate, John Abraham is seen in a bulky and intense look. From the looks of it, it seems that the film will celebrate the theme of the day which will be patriotism. As the tagline suggest, ‘Beimaan Pitega, Corruption Mitega’ [The dishonest will be punished, corruption will vanish], the film deals with the story of a man who fights against the system. It is also said to star Manoj Bajpayee and it marks the Bollywood debut of Aisha Sharma.

Interestingly, Satyameva Jayate is releasing alongside another film based on patriotism, which is Gold. Starring Akshay Kumar, the said film is a period sports drama revolving around India’s first win at the Olympics. Gold, which also marks the debut of TV actress Mouni Roy, is expected to hit the silver screen on August 15, commemorating the occasion of Independence Day.

There is also another film that will release during this Independence weekend. We are talking about the comic caper Yamla Pagla Deewana Phir Se. The third instalment in this Dharmendra, Sunny Deol and Bobby Deol franchise is releasing after five years.

Coming back to Satyameva Jayate, the film is directed by Milap Zaveri and is produced by Nikkhil Advani, Monisha Advani, Madhu Bhojwani of Emmay Entertainment and Bhushan Kumar of T-Series.

Also Read: Gold vs Satyameva Jayate - John Abraham opens up about clash with Akshay Kumar on this Independence Day