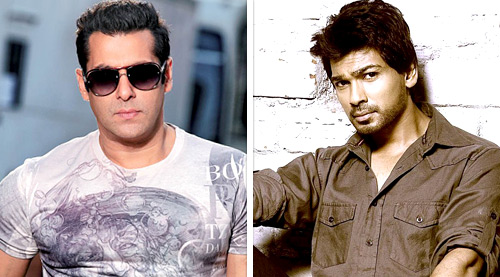 The countdown has begun for Nikhil Dwivedi. Coming back on the big screen with a solo outing of his, the actor who found some good acclaim coming his way post Raavan and Shor In the City is now gearing up for his Tamanchey. What has made his journey further special is the fact that none less than Salman Khan is extending wholesome support for him as well as his film. So much so that after presenting his film's promo to the audience on social media, he also made an appearance for the club song 'In Da Club' by turning DJ for the evening.

"Well, I think all of this is being played up too much because it's Salman Khan out there," says Nikhil, "See, we need to understand that irrespective of what the film has to offer, Salman by nature is a very kind hearted person. He genuinely wants to help out. He thinks that if good happens to people around him then there is nothing wrong in that," says Nikhil who was acknowledged as a 'a promising actor' when he debuted with My Name Is Anthony Gonsalves (2008).

Now that he would be seen in an out and out commercial film with right doses of humor, song, dance, drama, action and romance, Nikhil is glad that Salman Khan is finding the film worthy enough to be positioned on a certain platform.

"Salman Khan did like Tamanchey, which is always a good thing," says Nikhil, "He has even given some valuable inputs for the film. I can't be thankful enough."

Meanwhile he is happy that the film is being talked about for all the right reasons, ever since the promo went on air followed by three songs - 'Pyaar Mein Dil Pe Maar De Goli', 'In Da Club' and very recently, 'Dildara'.

Says his co-star Richa Chadha, "It was interesting to do Tamanchey as it has a love story integrated so very well in the narrative that is full of humorous situations with some good action thrown in as well. I looked at the film from the whole script perspective and found it to be really commercial without going into the frivolous space."

This is something that presumably caught Salman's attention as well and now Richa is happy that from being 'Bholi Punjaban' in Fukrey and Nagma Khatoon in Gangs of Wasseypur, she would be seen as a Delhi/Haryana girl Babu.

She adds, "Yes, I am bringing in a Haryanvi touch while speaking Hindi lines in Tamanchey. I had to prepare well for the part and also did a few workshops. There are quite a few rustic parts that come my way and I take a conscious call not to get slotted in any particular stage, set up or characterization."

While Salman Khan appears to approve what she and Nikhil are bringing on screen with Tamanchey, there are still a few days to go before audience give their consent as well.