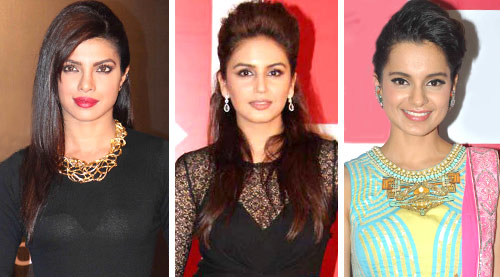 When journalists asked Kangna Ranaut who her 'man of the year from Bollywood' is, Kangna took the name of Ranveer Singh. When a reporter prompted her by saying, "why not Salman Khan?", Kangna replied, "I thought I am supposed to say what I feel like." Kangna incidentally has openly expressed her reservations about award shows and why she would rather attend an acting class in USA rather than attend an awards show for bagging an award. With Queen touted to be up for nominations in award functions this year, maybe she has done a re-think.

Imran Khan may not have had a great run at the Box Office off late but his sense of humour is intact and that's good news for his fans. Imran is one of the rare Bollywood actors who doesn't sugar coat in gloating about adjudging every single award show that they go for as the 'Best'. In a tongue-in-cheek manner Imran stated, "The main target for tonight is going to be GQ, the guys who are paying our cheques. I have a very clear funda that take payment in advance because after the show they are not going to pay us."

Arjun Kapoor came for the event, which was rather late in the night wearing shades (which he thankfully removed after a point of time). He is of the opinion that man of the year in Bollywood on a consistent basis is Salman Khan while he considers Narendra Modi as the man of the year in India in general. Varun Dhawan was in a sprightly mood. He doled out 'Bade bade shehron mein chhoti chhoti baatein' dialogue from Dilwale Dulhania Le Jayenge and quickly added, "I love Shah Rukh Khan by the way." Nargis Fakhri looked like a Rock Star.

You may not approve of the concept of a men's awards show with choicest glamorous ladies being awarded left right and center but there was no shortage of glamour for the evening. Some of the manufactured-categories were nothing short of laughable!