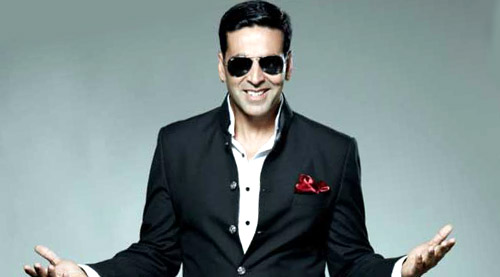 Entertainment is running in theaters and is finding its way in the hearts of family audience, especially kids.

Meanwhile Akshay Kumar is placing his bets on Sajid and Farhad and truly believes that they are the ones to watch out for.

He says, "To me, they are the future directors of comedy cinema in India. Their track record speaks volumes. People adore their sense of humor and though it may not be for absolutely everyone under the sun, one cannot cater to the masses as well as the highly educated with every film."

Akshay Kumar has also come back smiling after his first ever association with producer Ramesh Taurani.

"He is extremely good at what he does and this equation swings both ways," he smiles, "I am just as flattered and proud to be working with Tips, as they are with me. Entertainment was a pleasure to shoot and a lot of that had to do with Rameshji's work ethic, trust and downright professionalism. This whole film is going to be very hard to walk away from, both personally & professionally."

For Akshay Kumar, it is a win in itself to find his way into the hearts of the little ones who are liking his antics with the canine. No wonder, he is smiling from ear to ear.

"I really believe that every child should have a dog while growing up," says Akshay, "Studies have shown that the responsibility levels of a child who owns and cares for his dog is approximately four times greater than that of a child without a pet. I believe this is something to think about and that's exactly what this film will do to almost everyone. Entertainment leaves you with the feeling that your home truly deserves some puppy love, if you have the heart to let it."

In terms of sheer camaraderie build up, Akshay fondly remembers his interaction, communication and running around with the dog.

"He was treated with utmost love, care and respect. If we had to do fifteen takes for the dog to get his groove on, we didn't mind. He was the best animal an actor could wish to work with," says Akshay before signing off.