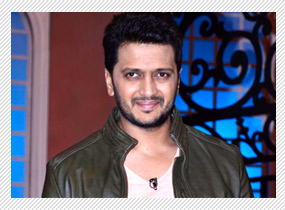 After continuous comic streaks that Riteish Deshmukh has been enjoying for years in succession, the actor is now exploring his darker side with Ek Villain. No wonder, one waits to be shocked and surprised to see 'Mr. Nice Guy' from the industry wear the kind of persona which is least expected from him.

Though many are intrigued with what you have to offer outside comic genre in Ek Villain, they seem to have forgotten that you have turned serious twice before with Ram Gopal Varma's Naach and Rann.

Well, I guess Ek Villain is surprising them all the more since it is completely an opposite outing to what I have done in my career, including Naach and Rann. I am glad Mohit (Suri), Ekta (Kapoor) and the writers thought of me for Ek Villain. It has been a great pleasure to be working on a character that people don't equate with me. Guess when the film releases, you would truly know what I am doing in there.

The confusion continued right through around who was the villain of the piece - whether you or Sidharth.

It is a suspense dramatic thriller so obviously that's the kind of pitch we had to make in the promos too. When you see the film, you would know where these two guys are coming from. Hopefully as an audience you would able to see that, since these are layered performances. It was good to have Sidharth as a co-star as he brings in this raw energy on screen. He has done just three films so far and still he is so wonderful as an actor. He is completely in control of himself in the film.

Was it easy for you to be in control of the proceedings, considering the fact that it is a dark world out there in the film? Wasn't it discomforting?

I think the world is perfect in Ek Villain; just that the people in there are discomforting. Every person has a darker side to him or her and this is what Mohit has explored in the film.

As a producer, you seem to be exploring quite a few different genres, be it Balak Palak, Yellow or now Lai Bhaari.

I am happy that Balak Palak has been a good commercial and critical success. Moreover, Yellow has also won a National Award. It has been great that way so far. Hopefully, I would be making more films in Marathi as well as Hindi.

Which is your next immediate Hindi film?

I start shooting for Farhan Akhtar and Ritesh Sidhwani's Bangistan in July. That's the only film which I have currently signed.